Flormar tries to prevent workers from seeing each other 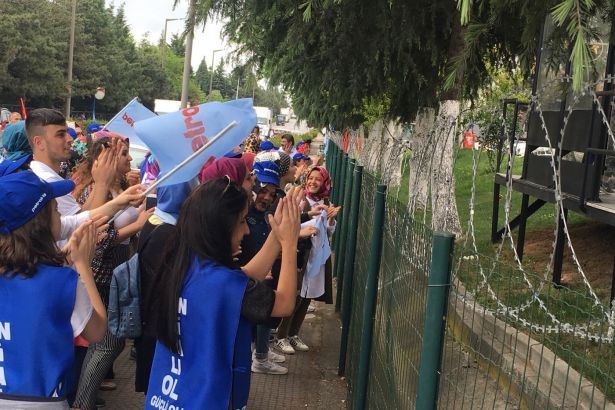 115 workers who have been picketing after getting fired from Flormar, a cosmetics brand in Turkey, because they had been unionised found in May 21 morning that the entrance of the plant was closed with a 3-metre tarp, and the plant was fenced with barbed wire, so that the resisting workers could not communicate with the workers inside. The workers said: “This is clearly an indicator of enmity against workers … They are trying to prevent our friends in there from seeing us.”

The company did not pay damages to the fired workers, and although it is very well known that the firings were because the workers had unionised in the Chemical and Rubber Workers’ Union of Turkey (Petrol-İş), executives of the company told the press that the 115 workers were fired because they had “picked a fight” in the plant.

The workers started to unionise in Petrol-İş in early 2018. After the union has reached the required number of members and was recognised by the Ministry of Labour and Social Security as the authorised union, Flormar started to fire unionised workers. First, they dismissed 85 workers, and the number has reached 115 now. The workers still resist in front of the plant in Gebze district of the city of Kocaeli, and demand reemployment.

The workers were visited on May 18 by two of the socialist independent candidates, Aydemir Güler and Mustafa Tozkoparan, running under the roof of “This Social Order Must Change Platform" for Turkey’s upcoming elections on June 24. In his speech addressing the resisting workers, Güler stated that it was not just the workers resisting there, it was humanity demanding justice, and said: “Beauty products are manufactured here. What makes one more beautiful – those products, or struggling and class solidarity?”