"First Lady" Erdoğan living in one-thousand room palace: We need to revise our culture of consumption

Spouse of Turkey’s President Emine Erdoğan who lives in a thousand-room palace speaks at the World Economic Forum: We need to revise our culture of consumption 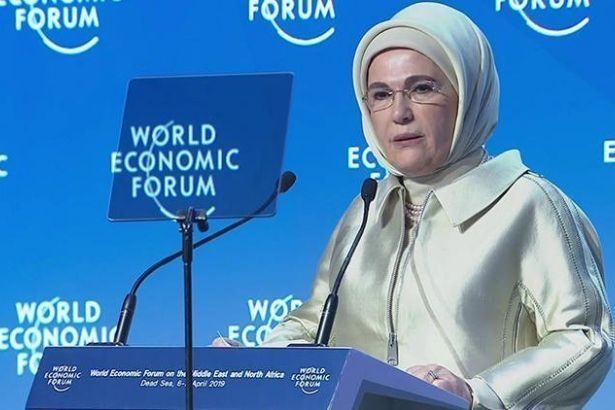 Talking about global warming, Erdoğan said "We are inclined to expect solutions from governments and large-scale companies for such significant problems. However, creating an environmentalist economy depends on our behavior patterns."

"Within this context, we need to revise our culture of consumption. Today most common marketing strategy is to make people believe that they need something.
However, a great Arabic proverb suggests “The one who buys something he does not need sells something he needs” I believe that the verse in Holy Quran stating “we have created everything in balance and proportion” invites us to preserve the balance in the World and promote our environmental sensitivity. A staid Muslim shall calculate the carbon footprint he leaves behind because a believer is respectful to all creation. He is respectful to the rights of other beings, he avoids any kind of extremism, and he knows the civilized way of living is the simplest way of life," Erdpğan added.

Emine Erdoğan who advocated for a simple life and a revision of consumption culture in her speech is known for closing down luxury shops at Louise Street of Belgium in order to shop without the interference of the public according to Belgian Press.

The "First Lady" lives in White Palace in Ankara, which has more than one thousand rooms and was constructed by her spouse Tayyip Erdogan. According to the numbers announced by the Supreme Court of Public Accounts, the expenditure of the White Palace in 2017 was over 658 Million Turkish Liras (Approx. 175 M USD).