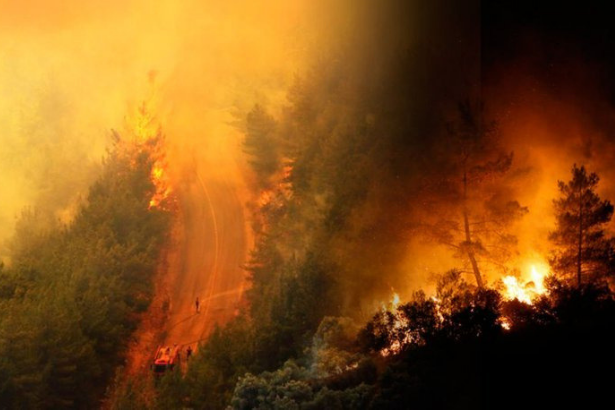 MP of the main opposition party CHP, Tacettin Bayır, stated ”20 planes of Turkish Aviation Institution sits idle because the Ministry of Forestry chose so. 1.8 million Liras are being spent to the White Palace on a daily basis, but there is no money to spend on the forests of İzmir."

Forest fires which started on Sunday in İzmir and could not be extinguished for over 2 days have turned hundreds of acres of land into ash. The biggest fire in İzmir's Karabağlar district has reportedly taken under control on Tuesday afternoon.

The fires, which can be observed by various locations in İzmir, caused intense smoke and the villagers were on watch in the regions where ashes rained.

While the increase of fires in the last month raised suspicions, the lack of precautions is an issue discussed among the people.

“20 PLANES SIT IDLE IN THE HANGAR”

MP of opposition party CHP Tacettin Bayır has issued a statement criticizing the Minister of Agriculture and Forestry Bekir Pakdemirli. In the statement, it is said that ”this incident once again shows us that we lack the required precautions and foresight. There have been problems during the intervention to a significant fire like this one.

"20 fire extinguisher planes of Turkish Aviation Institution sits idle in the hangars because the Ministry of Forestry did not want to use them. While these planes were used in the previous years, this year the Ministry has leased 34 helicopters from another company. Now I am asking, “why were the planes not rented for the fire in İzmir? Will you rent the planes when there is nowhere left to burn?”

“Can not the government which spent millions for the Presidential Palace afford a fire extinguisher plane?” Bayır added.

Bayır also stated that “these fires which are not ordinary incidents have caused severe results combined with the effect of the wind. We think the Minister of Forestry who claimed that we are the best country when it comes to fighting forest fires does not recognize the significance of this incident. İzmir is still burning. Why do not you rent extinguisher planes?

"The state can afford to spend 1.8 million Turkish liras for the White Palace [Erdoğan's Presidential Palace], but do not have money for the lungs of İzmir? What is your problem with İzmir? The authority has stated that the helicopters and planes cannot fly at the same time. Are you kidding us? You can rest the planes while helicopters are working and rest the helicopters while the planes are working. In this way, you can enable the pilots to work more efficiently.“