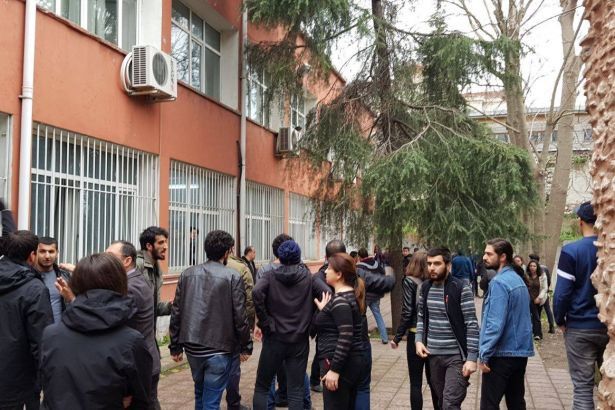 TKG members were distributing leaflets saying "Without targeting the NATO, the imperialists cannot be beaten" when they were attacked by a fascist group at Beyazıt campus of Istanbul University in Turkey. A TKG member was slightly injured during the brawl and they were attacked again while trying to leave the campus.

The fascist group claimed that the communists attacked them. The private security unit of the campus gathered TKG members at the garden and issued one of the fascists to "identify" the attackers. Upon the statement of the fascist, 22 TKG members were taken into custody.

In the meantime, the members of the fascist gang chased and attacked students they considered TKG members in the streets, severely wounding several students. The police did not intervene in the attacks of the fascists.

NO TO THE GUARDS OF NATO AT UNIVERSITIES

TKG members said "Anti-NATO campaign of the Communist Youth of Turkey has annoyed the US admirer gangs mobilised by the political power and the police, while the campaign has been supported by the patriotic youth defending and demanding the sovereignty of their country " in the statement they released to protest the attack.

The statement reminded that the sham anti-imperialist and anti-NATO discourse of Turkish government masks their real aim, which is to end conflicts between the capitalist class of Turkey and the US. Adding that the fascist gang that attack anti-imperialist youth is the continuation of the pro-US stance of the political power in Turkey.

"We are proud of pursuing the struggle of Turkish youth who drove NATO soldiers to the sea 50 years ago in Dolmabahçe," said the statement, adding that the communist youth of Turkey is determined to raise the anti-imperialist struggle against all oppression and provocations.