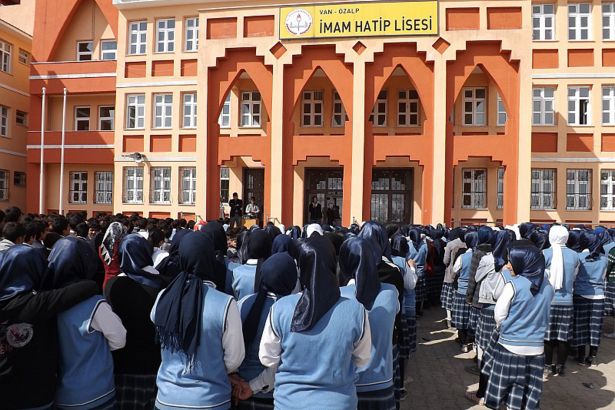 Turkey dropped from 44th spot to the 49th compared to the last test in 2012, according to the results made public on Dec. 6.

Some 31.2 percent of Turkish students below 15 years of age underperformed in mathematics, sciences and reading, according to the results of the PISA test.

In contrast, only 10 percent of students in countries that neared the top of the list underperformed on math, sciences and reading.

The head of the Eğitim-İş educational workers’ union, Mehmet Balık, said Turkey had regressed to where it was 12 years ago.

'RULES OF ANY RELIGION OR SECT SHOULD NOT BE IMPOSED'

“The education system should develop students’ reading skills, [ability to] understand what they read … solve problems and make evaluations,” he said. “The rules of any religion or sect should not be imposed on students in schools and any religious symbol should not be present in school books. Teachers also should not impose any religious faith on their students.”

The education policy of the ruling Justice and Development Party (AKP) under the leadership of Recep Tayyip Erdoğan in Turkey has increasingly been a topic.

Despite international courts ruling that Turkey should respect the preferences of pupils, critics say the AKP is seeking to reshape the system along Sunni Islamic lines. In recent years, a slew of government initiatives has pushed Islam deeper into Turkey’s nominally-secular education system. Recent government moves to convert a large number of secular schools into Imam Hatip religious schools has added to the controversy.

The Education Ministry’s program of converting secular high schools into Imam Hatip institutions has left many students with little option but to enroll in religious education.

In September 2014 the government granted permission for girls as young as 10 to wear headscarves in class. Plans have been floated to extend compulsory religion classes to all primary school pupils.

In 2012, the government introduced a contentious 12-year compulsory education system with four-year phases of primary, middle and high school, known in Turkey as the “4+4+4”, paving the way for religious middle schools.

Under a scheme introduced by the government last year, about 40,000 pupils were forcibly enrolled in religious Imam Hatip schools. In some districts religious vocational schools were suddenly the only alternative for parents who could not afford to educate their children privately.

A leaked audio recording released, allegedly of Erdoğan’s son Bilal delivering advice to a meeting of Islamic foundations and local education officials in August 2013. The recording was part of a police investigation into alleged corruption at Türgev, an educational charity on which Bilal Erdoğan serves as an executive board member.

“My concern about imam-hatip schools is that we try to increase their availability,” a voice alleged to be that of Bilal Erdoğan is heard saying. “We are at 10% [of overall pupil numbers], likely soon it will be 15%. Do we want to increase the percentage of available imam-hatips to 25%? Or should we, on the other hand, try to establish a strong structure for the other 85%?” Acknowledging that further increasing the number of imam-hatips may be “unrealistic”, the voice suggests that school administrations could pressure students to take optional religious classes in order to boost Islamic content in normal schools. “If some schools manage to assign 11 hours out of 40 to elective religion classes, that would be like having imam-hatips.”

Singapore was top of the PISA list in all three categories, gaining top spot over the 2012 winners, Shanghai. In the previous edition, only a few individual Chinese cities participated in the PISA test.

Rounding out the top 10 were Japan, Estonia, Taiwan, Finland, Macao, Canada, Vietnam, Hong Kong and then the Chinese cities of Beijing, Shanghai, Jiangsu and Guangdong.

The United States, by contrast, finished 25th in science, 24th in reading and 40th in math.

Significant countries in Europe such as Britain, Germany and France protected their place in the PISA test in comparison with the test in 2012.

The OECD operates the triennial survey of 15-year-old students around the world as part of PISA, the Program for International Students Assessment.

PISA assesses the extent to which 15-year-old students, near the end of their compulsory education, have acquired key knowledge and skills that are essential for full participation in modern societies.

The assessment focuses on the core school subjects of science, reading and mathematics.

PISA is an ongoing program that offers insights for education policy and practice, and that helps monitor trends in students’ acquisition of knowledge and skills across countries and in different demographic subgroups within each country.