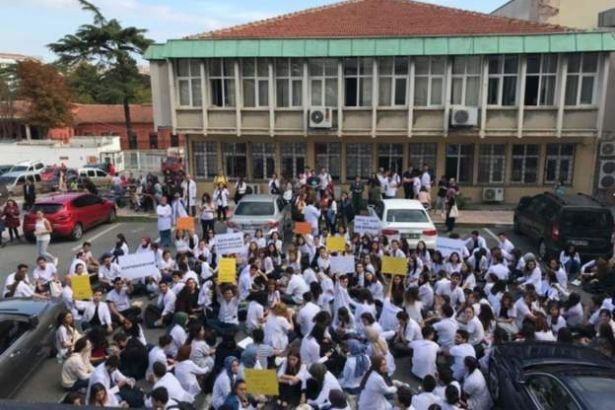 Serious damage was also detected during the examinations of the Istanbul University Faculty of Veterinary Medicine located in Avcılar.

Since corrosion was detected in the bars of the columns in the basement of the building, the building was decided to be evacuated. After the decision, teams coming to university this morning launched evacuation procedures.

It was also announced that the dormitory buildings located on Avcılar campus will be evacuated until the 6th of October due to the earthquake damage.

Students and academic staff refused to enter the buildings immediately after the damage was clearly seen. They started a sit-in action on September, 30 to protest the authorities taking no measure.

It was reported that both the Faculty of Veterinary Medicine and Faculty of Dentistry were damaged by the earthquake. Lots of pictures were published showing the huge cracks of the building, and the authorities were called on duty.

After the protest, the examinations of the buildings were begun by the authorities. The education in the Veterinary and Health Sciences faculties was suspended for 20 days.

“UNIVERSITIES ARE UNPREPARED FOR EARTHQUAKE”

University Participants Association in Turkey made a statement mentioning the universities’ failure in preparation for the earthquake.

The statement said, “the main point is clearly visible when we look at the attitudes of the university administrations. The first thing to do for the faculty administrations had to be shutting down the building in the face of the damage for assessment. However, they insisted on the approach to continue using the building and education.”

“It seems that nobody has any idea about what students and staff should do during an earthquake and how to evacuate buildings and where to gather. It is absolutely unacceptable to keep doors outside the main entrance gates of the university buildings, especially emergency exit gates, locked for security reasons,” UKD statement added.

Emphasizing that it is the state’s responsibility to maintain education and research activities under the conditions where life safety of students, academic and administrative staff in universities is ensured, the association urged university administrations, YÖK (Council of Higher Education), Ministry of Environment and Urbanization to fulfill this responsibility immediately.