Expert report shows negligence regarding the building collapse in Istanbul 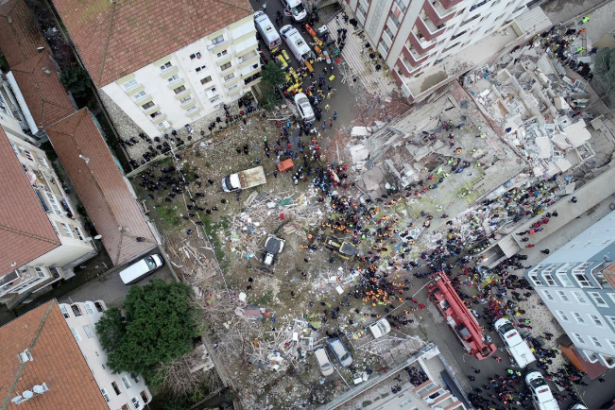 The Yeşilyurt Apartment in Kartal, Istanbul collapsed resulting in 21 dead and 14 injured. The preliminary expert report prepared as a part of the investigation demonstrated that the cement used for the building did not conform to the Turkish standards as well as the quality foreseen by the initial project.

The details of the preliminary report prepared by the construction and mechanics engineers and occupational health and safety specialists within the framework of the investigation undertaken by the Anadolu Public Prosecutor’s Office regarding the collapse of the apartment building are now announced.

According to the report, 47 residents resided in the 9-floor apartment while flats 1 and 7 were not occupied and the basement floor was used as textile storage.

The part of the basement floor was also used as a carpenter workshop and an office despite not being actively in use.

The owner of the building, Hikmet Yeşilyurt, applied for the demolition of the previous building on 21 May 1992 to the Kartal municipality and was granted the permission on 17 June 1992.

The Kartal municipality allowed the construction of a new 7-floor building on 16 October 1992.

SEA SAND WAS USED FOR THE CONSTRUCTION

According to the report, measures of sampling and analysis were conducted between February 6, when the building collapsed, and February 10, when search and rescue operations terminated.

The report demonstrated that the cement was made of non-washed and non-sifted sea sand.

Besides corrosion on rebar, sea shells were observed in the cement as a result of lack of washing and sifting. Nonetheless, the wreck removal could be completed up until 75% of the basement floor and the left axle could not be examined since the next building is also subject to the possibility of collapse.

The report further demonstrated that some columns were strengthened with no specific project and calculation.

During the wreck removal operations, coring was conducted while certain coring samples remained useless. The thickness of rebar that corroded was measured and 12-rebar were reduced to 9,5-rebar. 19 coring samples were subjected to the concrete compression test in a lab accredited by the Ministry of Environment and Urbanization.

While the project foresaw the use of BS16 (C16) quality cement, the concrete compression test results showed that 10 out of 19 samples had a resistance lower than 16N/mm2.

THE REASON IS THE QUALITY OF CONCRETE

The report underlined the possibility of lack of intention for the cause of the accident which could be prevented with necessary measures. Nonetheless, the report underlined that ones who were involved with the construction, particularly the author of the project, the technical application specialist, the chief warden, the contractor, and the inspectors supervising the construction of the Yeşilyurt Apartment should be held accountable.