European Communist Initiative: "Free and safe vaccination must be ensured for all peoples!" 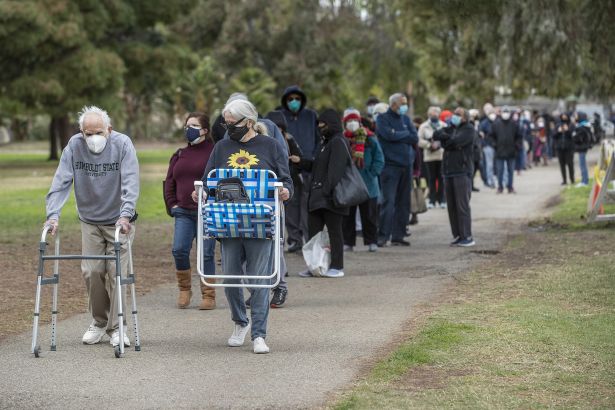 A couple makes their way with others in a line to get vaccine shots to protect against the coronavirus at the Balboa Sports Complex in Encino, Calif., on Jan. 27, 2021.
  

The European Communist Initiative has made a statement regarding the right to access free and safe vaccination for all world peoples.

Condemning the anti-vaccine rationality and unscientific theories, the Initiative puts that the capitalist profit and monopolistic competition criteria, which delay the supply of necessary vaccines, have become obstacles to the people of Europe and the world.

Free and safe vaccination must be ensured for all peoples! The people's struggle for bold support of the public health systems must be strengthened, and the way must be opened so that health is not considered a commodity but a social good.

The European Communist Initiative, with a sense of responsibility, supports the need for mass vaccination of the peoples as one of the basic and necessary measures to tackle the pandemic. Vaccines should be safe and free. We refute the various irrational and unscientific theories against vaccines. We believe that vaccination can be a conscious act and demand of the people to protect their health, following the scientists' recommendations. The scientific necessity of the vaccine to tackle Covid 19 and other diseases is not negated because the pharmaceutical companies act based on competitiveness in the capitalist market framework. The struggle to overthrow this situation continues.

At the same time, we believe that the criterion of capitalist profit and monopoly competition, which delayed the timely provision of the necessary vaccines, now poses obstacles to ensuring the necessary number of effective and safe vaccines for all the peoples of Europe and the world, while new variants of the virus are emerging. This happens when the pharmaceutical companies were heavily funded for research and manufacturing and used the vaccines' pre-purchase as a guarantee. They hid the research results from each other, hindering interdisciplinary cooperation that proved to be incompatible with the capitalist competition. They are still provocatively hiding the contracts for the supply of vaccines with the EU, and the governments are very lucrative and in favour of their interests.

In essence, the EU, like all bourgeois governments in considering health as a commodity, sees the vaccine as another source of profitability for the big capital.
The ECI demands the Commission and the governments to make public all aspects of the contracts signed between the EU and the big monopolies that manufacture and supply vaccines and provide the people with all effective, safe vaccines and any suitable pharmaceutical treatment. In addition, the fact that the issue of treatments and medicines that seem to be contributing to the tacking of the virus is not being promoted raises questions.

In this phase of the pandemic, bourgeois governments, which have supported the commercialization and limiting of public health systems, try to present the start of vaccination as an “antidote” to the situation. The reality is different: The start of vaccinations, which in many cases takes place long delays, can in no way balance the huge shortages of commercialized public health systems, which have been exhausted by tacking the pandemic, with the heavy consequences for those patients from the working-class and popular strata suffering from other diseases.
The ECI expresses its solidarity with the people of the less developed capitalist countries, which are in dire straits on vaccination. The capitalist mode of production itself, the bourgeoisie and their representatives, in both the strongest and the weakest capitalist countries, are responsible for this situation. The opponent of the peoples is common. The vaccine cannot be used for the so-called “medical diplomacy,” i.e. the promotion of major geopolitical and economic interests under the guise of free or cheap vaccines from the EU or other powers as the US and China to the less developed capitalist countries. There is fierce competition among them in conditions of a capitalist crisis accelerated by the pandemic, and the people suffer the heavy consequences.

The ECI supports the struggle of the peoples and the healthcare personnel's demands for free and regular tests, recruitment of permanent doctors and nurses, an increase of Intensive Care Units, measures to protect workers in the workplace, in public transport, in schools and universities.

It calls upon the people to intensify their struggle to reinforce public health systems, for the requisition of the private health sector, to shape the conditions and pave the way so that health, medicine, and vaccines are not considered commodities but a social good. This can be achieved only with the socialization of the means of production, the central planning of the economy, with the people becoming the owner of the wealth they produce, free from capitalist profit, competition and exploitation.

It calls upon the people to intensify their struggle to reinforce public health systems, for the requisition of the private health sector, to shape the conditions and pave the way so that health, medicine, and vaccines are not considered commodities but a social good. This can be achieved only with the socialization of the means of production, the central planning of the economy, with the people becoming the owner of the wealth they produce, free from capitalist profit, competition and exploitation.