The European Communist Initiative (ECI) released a statement, commemorating the May 9th, the day of Great Antifascist Victory of the Peoples 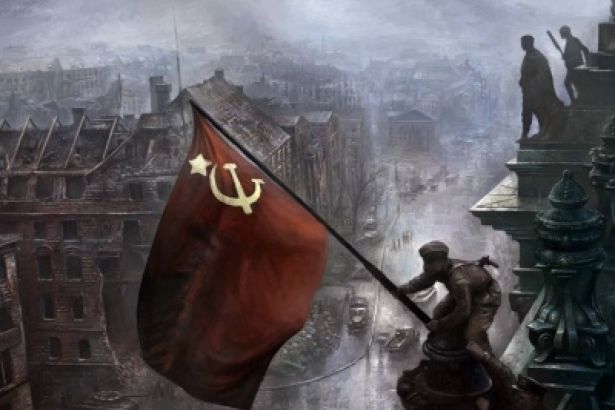 European communists released a statement on the anniversary of the day when the Red Army raised the red flag in Europe, completing the greatest peoples’ victory against fascism in the Second World War.

Noting that the EU attempts to erase the great antifascist victory of the peoples from the historical memory and conscience of the peoples by turning the 9th of May into the “day of Europe”, the statement called on the peoples to weaken the forces that support the EU. The full statement is as follows:

On the Great Antifascist Victory of the Peoples

The ECI sends militant greetings to the peoples of Europe on the anniversary of the Great Antifascist Victory of the Peoples!

The historical truth cannot be distorted or erased.

The great resistance of the Soviet people against Nazi Germany, which was promoted then as being invincible, and its allies in Europe ended with the crushing and the unconditional surrender of fascism. The 9th of May is recorded in history as the day when the Red Army, by raising the red flag with the hammer and sickle over the Reichstag, completed the greatest peoples’ victory against fascism. This is the day that signaled the end of the Second World War in Europe.

In November 1936 Japan and fascist Germany signed an anti-Communist agreement (the Anti-Comintern Pact). In the period 1939-1941 the German fascist armies, in pursuit of the nazi desire for world domination,  occupied Poland, Denmark, Belgium, Holland, Norway, France, Greece and Yugoslavia. While the destruction of the Soviet Union was a declared objective of nazi Germany all the capitalist powers were hostile to the USSR and the achievements of socialist power.

In June 1941 fascist Germany attacked the Soviet Union. In the first two weeks the fascists had advanced deep into Soviet territory capturing Lithuania, Latvia and a considerable section of Byelorussia, the Ukraine and Moldovia. The Soviet people, led by the Communist Party of the Soviet Union, mobilised all the resources at their disposal to repulse the enemy and defeat fascism. At the request of the CPSU and the Soviet Government hundreds of thousands of Soviet citizens entered the ranks of the Red Army. In the bitter defensive battles in the summer of 1941 Soviet forces heroically defended their homeland. The struggle of the SU became a critical part of the struggle of the peoples of Europe and the world against fascist aggression. The heroic defence of Stalingrad, the defeat of the fascist forces at the Battle of Kursk and the heroic actions of the communist partisans shattered the resolve of the fascists.

On 30th April Hitler committed suicide in the face of certain defeat.  The following day, 1st May 1945, the red banner of victory, emblazoned with the hammer and sickle, was waving over the Reichstag – an emblematic symbol of the decisive role of the USSR in the defeat of fascism. Nazi Germany surrendered the following day and in the subsequent days the nazi Command signed the instruments of surrender. On 9th May the Soviet forces destroyed the nazi task force encircling Prague and Germany, which surrendered unconditionally. Victory was secured, fascism was decisively defeated, countries and peoples were liberated from fascist oppression and peace was restored in Europe.

The endurance and fighting capacity of the Soviet Union was a result of its socialist character, its central and scientifically planned economy with the people having the ownership of the wealth that they produced.

On 12th January 1945 the Red Army launched its final offensive along a front extending from the Baltic Sea to the Carpathians. The offensive developed at a rapid pace. The nazis brought up all available forces for the defence of Berlin. Berlin became the scene of a momentous battle where advancing Soviet forces took the city, street by street and house by house.

Fascist aggression had been confronted and destroyed. This was achieved by the Soviet Union and its allies, including the anti-fascist resistance in fascist occupied Europe. However, it is important to recognise and remember the decisive role of the Red Army, the Soviet Union and its people in the defeat of fascism. The Soviet Union lost over 20 million of its citizens. 25 million people lost their homes. 1,700 cities, 70,000 villages and 31,850 industrial enterprises were destroyed. Over two million Soviet Communist Party members were killed in action or in guerrilla operations or in the underground struggle. The defeat of German fascism and Japanese militarism opened the road to socialist revolution and liberation throughout Europe and the world.

The continuing offensive of capital and dangerous developments in NATO, the European Union and the US together with sharpening inter-imperialist rivalries continue to underline the ever-present threat of fascism and imperialist war.

The slanderous anti-communist offensive which seeks to obliterate the historical truth will not be permitted to prevail. The liberation of Europe and the world can never be separated from the historic role of the world’s first socialist state, its people and the millions of communists who sacrificed their lives and decisively contributed to the defeat of nazism and fascism.

The European Communist Initiative exposes and condemns the systematic attempt of the EU to erase the great antifascist victory of the peoples from the historical memory and conscience of the peoples by turning the 9th of May into the “day of Europe”. It decisively fights against anti-communism and the unhistorical identification of communism with the monster of fascism, which the EU and its governments seek to establish. The distortion of history, which uses as a tool the dissemination of anti-communism and the unhistorical sermons especially to the youth, will not pass. We condemn the EU policy that promotes anti-communist persecutions, prohibition of the activities of CPs and communist symbols, the destruction of memorials dedicated to communists and antifascists such as those being under way in Poland, Ukraine, the Baltic States, the provocative rendition of honors and pension payments to the Nazis and their descendants etc. We express our complete solidarity with the cadres of the CP of Poland, who are again being tried on May 15th by the Polish authorities, despite their acquittal 3 months ago. They will not manage to put obstacles to the propagation of communist ideas.

Racism, fascism and the extreme right wing are forms of managing capitalism, the dictatorship of capital. These reactionary currents are being fueled by the anti-people policies of the EU, the wars that it wages, its policy against immigrants and refugees, anti-communism and the unhistorical equation of communism with fascism, all of which being its “founding value”.  They are fueled and proliferated by capitalism itself, the system which the EU and bourgeois parties serve. This is why social-democracy –old and new –, the bourgeois forces that support and defend the EU are trying to deceive the people in the run-up to the European elections by presenting themselves as supposedly “progressive”.

But what is really progressive is the political line of the CPs, their struggle against the EU, the class struggle and the communists’ devotion to organising this struggle. As history has shown, communists are the consistent, unyielding and effective opponents to fascism and the system that feeds them. For this reason, the peoples in the run-up to the European elections can decisively strengthen the CPs that are fighting against the EU, comprehensively against the imperialist unions. The CPs’ reinforcement in every political battle contributes to the development of the struggles of the peoples.

We call upon the peoples to weaken the forces that support the EU in any way and cultivate illusions that the EU “can be fixed”.

NO to the EU of the monopolies, of capital and wars!

Onward for a Europe of the prosperity of the peoples, of peace, social justice and democratic rights, of socialism!