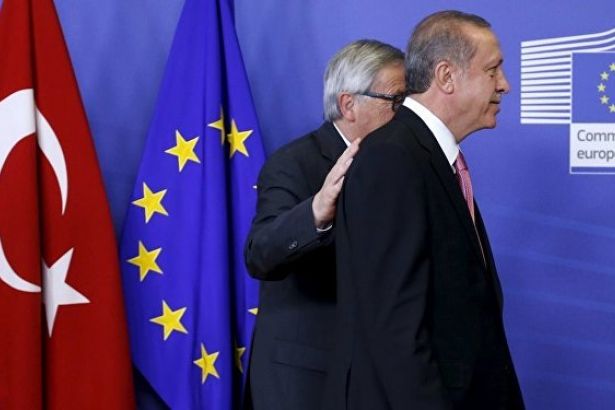 The European Commission declared its membership accession report 2019 for Turkey. The report, similar to the ones in previous years, underlined that Turkey could not progress in the way the EU expected.

The report highlighted the EU’s concern for problems in the Turkish economy in relation to the requirements of free market economy, measures taken during and following the 15 July coup attempt, Turkey’s drilling efforts in eastern Mediterranean, the arrests of journalists and MPs, and the Higher Electoral Council’s decision regarding the local election in Istanbul.

The abovementioned highlights are related to the failure of Turkey to progress. In general, Turkey could not progress in ten out of sixteen chapters in negotiation, and Turkey even regressed regarding human rights and freedoms, justice, economy, and interior affairs. Nevertheless, Turkey progressed regarding cooperation in energy and transportation.

It is debatable to what extent and which actor actually cares about progress-regress regarding the negotiation process at a stalemate since no new chapter could be currently opened. Such a situation itself could perfectly exemplify the hypocritical relationship among the actors.

We could find more examples of such hypocrisy.

Neither the EU nor the AKP really cares about the issues underlined in the reports. The accession process itself is a foreign and domestic policy tool in the hands of both actors.

Turkey’s possible membership to the EU remains a lie that was sold during the early years of the AKP government. Islamists, conservatives, left-liberals, and liberals magnified this lie.

I am one of the members of a society which ‘learned not to cross at the red light’. Ones who do not support the AKP only now are the ones who sold us the lies about the relationship between the AKP and the EU. Supporting the EU has always been being hypocritical.

The years when the European capital was in the process of establishing a European common market, money, and military were the same years when communists, who said ‘the EU was an imperialist bloc’, were portrayed as nationalist by the same supporters. They could not achieve what they sought, but they greatly favored the AKP.

People living in Turkey knew two foreigners by heart: Carlo Cotarelli who was the Representative of the IMF Office in Turkey during when Kemal Derviş was in charge of the implementation of the IMF structural reforms, and Günter Verheugen who was the European Commissioner for Enlargement during the early years of the AKP government. Verheugen has always been remembered for his remarks against Turkey. Nonetheless, he announced the launching of Turkey’s accession process to the EU with references to the progress Turkey achieved. The negotiations between Turkey and the EU started in 2005 and were suspended in 2006 as a result of the Cyprus problem. Nevertheless, the dialogue between Turkey and the EU continued. The EU declared several reports regarding Turkey’s compliance with the EU chapters. Turkey later worked with the European Commission as well.

Well, what is the result?

The bourgeoisie got what they wanted. The process of Turkey’s membership in the EU was a capitalist project.

Precarious work has been expanded. Work hours have been flexed. Sunday is no longer weekend. Irregular employment has been legitimized and hence new forms of employment are created: Some employees are in reality unemployed, and some employees do not have a regular wage. The bourgeoisie has started to outsource workers. The state’s responsibility to find work and workers for the unemployed has turned into a source of revenue for the bourgeoisie. The bans regarding the rights to unionization, strike, and collective bargaining has been preserved. An unemployment fund which has better served to the bourgeoisie was created. The act on work safety was ameliorated, but the number of workers died at work accidents have incrementally increased. The private sector has been favored with privatizations that looted the public sector.

This is a shortened list of reforms undertaken to comply with the EU acquis communautaire until 2008.

Despite the worsening of negotiations between the EU and Turkey as well as the EU’s concerns highlighted in the reports, the EU welcomed the 2010 constitutional amendments which favored the AKP and possibly paved the way to the transition to presidential system in Turkey.

Nobody should fool anybody. The EU, the AKP, and the supporters of the EU demolished the Republic and built a new regime.

Recep Tayyip Erdoğan stated that the AKP would follow the Ankara criteria instead of the Copenhagen criteria at the 2007 Lisbon Summit following tension between the EU and Turkey.

It has come to this. Call it Ankara or Copenhagen criteria, support the EU or oppose to the EU, one reaches to the same point where the bourgeoisie wins at the end of the day.