SoL columnist Özgür Şen writes on the mosques overseas that are constructed and financially supported by the Religious Foundation under Turkey's Directorate of Religious Affairs. Presented proudly by AKP and Erdoğan, the mosque projects abroad are important indicators of the political aims and future of the government in different contexts 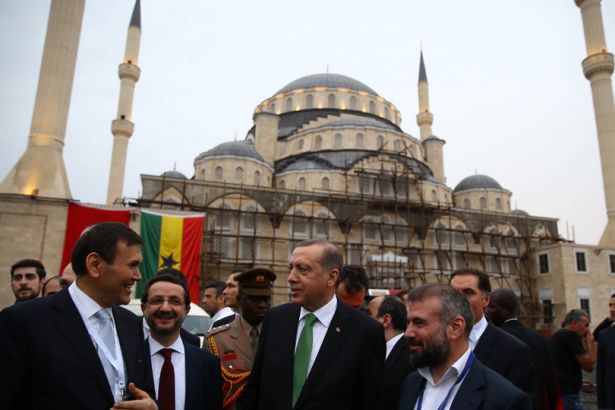 An institution under Turkey's Directorate of Religious Affairs, Turkey’s Religious Foundation, is carrying on projects in 140 different countries of the world with its one thousand branches. We're talking about a fairly large network. It is well known that the AKP has exaggerated what it does in many areas. But it is that much expanded, these kinds of overseas activities are worth examining.

One of the most important works of the Religious Foundation organized by its branches is the mosque constructions. And we cannot say they are just mosques.

Mosques have never been the places throughout history where the religious community gathered to worship. These regular meetings have offered a favorable ground for political and social organization. Moreover, unlike the common claims made by the right wing, clerics of Islam always had a natural and powerful influence on the community. The clergyman had the power to direct people on political and social issues. It could be realized through the sermon or preaching, which were seen as part of the worship as well as through the relations that the cleric established outside the worship.

The mosques that the Foundation did abroad or helped to build are not only intended to meet the needs of Muslims living in those countries. Moreover, the foundation does not only support the construction, but the relationship continues in numerous ways from funding the clergyman to be sent to the continuity of the financial support. AKP, through the Religious Foundation, designs and uses mosques to strengthen its influence abroad.

There is a long list of these mosques on the foundation's website. Macedonia, Lebanon, United Kingdom, USA, Mali, Kyrgyzstan, Kosovo, Philippines, Kazakhstan, Crimea, Haiti, Albania, Somalia, Russia, Palestine, Djibouti, Belarus ... In these countries, mosques either have been built recently or are still under construction. Moreover, in some countries, the number of mosques are more than one and the mosques completed earlier are not even listed. The mosques in Europe, especially in Germany, are not included in this list.

Religious Foundation announces their work proudly, continuously holds meetings in Turkey addressing the issue, organizes campaigns to find support. Overseas mosques are also used as a kind of propaganda inside to show the "power" and "influence" of AKP.

Erdoğan also does not hide that he is personally interested in these mosques, he talks about them whenever he finds an opportunity in overseas visits and searches for cooperation with relevant people. But this issue of course also creates discomfort.

Germany, which has a large Muslim population, is among the countries that are uncomfortable with AKP's use of mosques. While trying to cut the money coming from Turkey to the mosques, Germany openly expresses that those giving money determine the content of the sermons.

In another major country, mosques in the United States come to the agenda as one of the centers of the conflict between AKP and the Gülenist network.

The enormous mosque complexes built in Albania and Kosovo, for example, are frequently addressed in the Balkan press and draw attention to Erdoğan's regional goals.

It is possible to give more examples. But the data shows one same direction:

Mosques, just as in Turkey, are venues used in accordance with the objectives of the AKP and Erdoğan abroad. Moreover, just as it is in Turkey, these places can easily be covered under the discourses of holiness and people's needs to pray to provide them with an inviolability and to be able to use them for other purposes.

In this context, it may be necessary to follow the constructions of these mosques abroad and what is done around these mosques, which also can be put in diplomatic agendas. It is true that AKP's overseas activities depend on capitalists' businesses, diplomatic and military initiatives. However, Erdoğan's mosques abroad also provide us with numerous tips about AKP's aims and position as being an important part of the picture.