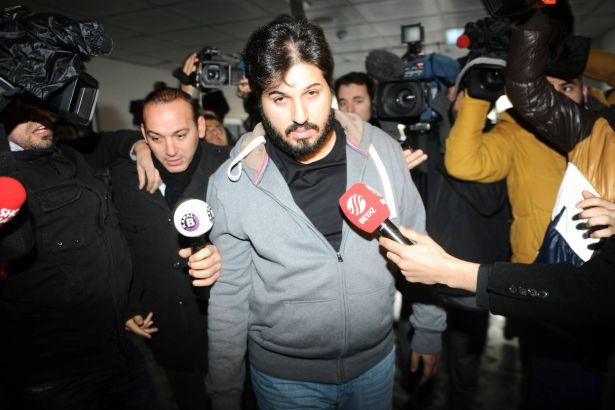 An Iranian-Turkish gold trader with ties to Turkey's President Recep Tayyip Erdoğan on Wednesday took the stand in federal court in Manhattan and testified that he paid jaw-dropping bribes to a government minister to grease the wheels of a scheme to evade U.S. sanctions against Iran.

His testimony is scheduled to continue on Thursday, with a possible cross-examination from the defence on Friday.

Reza Zarrab, who has pleaded guilty and is cooperating with U.S. prosecutors in the criminal trial of a Turkish bank executive, told jurors he helped Iran use funds deposited in Turkey's state-owned Halkbank to buy gold, which was smuggled to Dubai and sold for cash. The testimony came on the second day of the trial of Turkey's state-owned Halkbank executive Mehmet Hakan Atilla, who has pleaded not guilty.

In his first hours under oath, Zarrab detailed the origins of a complex sanctions-busting operation to move Iranian funds through front companies, forged documents and bribes. He got help, he said, from the man who was then Turkey's economy minister, Zafer Çağlayan.

MORE THAN $60 MILLION WAS PAID TO ECONOMY MINISTER

Zarrab said he paid Çağlayan, who is under indictment but not on trial because he is still in Turkey, bribes amounting to more than $60 million. In exchange, Çağlayan helped broker a deal in which Zarrab worked with Halkbank to help Iran use its money abroad through gold transactions.

Zarrab testified he agreed to split his profits with the minister, and prosecutors showed a spreadsheet that Zarrab said was a partial list of bribes he paid to Çağlayan detailing more than 30 million euros' worth of payments in about a year. The numbers were massive: 31 million Euros, $4 million in U.S. dollars and 2.4 million Turkish lira. But not all payments were listed, Zarrab said, he believed he paid bribes to Çağlayan of about 45 million to 50 million euros as well as about 2 million Turkish lira and about $7 million.

Zarrab also said before Çağlayan intervened, Halkbank's general manager at the time, Süleyman Aslan, refused to work with him because he was too famous.

The Turkish government has said that Çağlayan acted within the law.

Zarrab testified he and Mehmet Hakan Atilla were key players in the international financial scheme. He pointed out Atilla as "the most knowledgeable person about the sanction rules in Halkbank." Atilla helped "to make our scheme look like it’s complying with the American sanctions," Zarrab said, and at several points throughout his testimony, he said Atilla had advised on certain transactions, along with Süleyman Aslan.

Zarrab said that before working with Halkbank, it began when he sought to open an account at Aktifbank but was unable to do so because people dealing with Iran needed special permission. Egemen Bağış, who was then Turkey's European Affair Minister, set up a meeting between him and Aktifbank's general manager and that he was then allowed to open an account. At the time, Aktifbank was owned by a group led by Turkish President Recep Tayyip Erdoğan's son-in-law, now Energy Minister Berat Albayrak. However, Aktifbank later shut down the account after receiving a warning from the United States, Zarrab said.

Zarrab also later testified that he used a third bank, DenizBank, to process some transactions. He was soon moving 5 million to 10 million euros a day in transactions.

WEB OF TRANSACTIONS USED TO THE BEAT THE SANCTIONS

At one point, Zarrab drew diagrams for the jury to illustrate the elaborate web of transactions used to beat the economic sanctions and make him a fortune. The tactics included using Iranian proceeds from gas and oil sales to Turkey to buy gold, having couriers carry the gold in suitcases to Dubai, converting it back into cash that was deposited in a front company account and laundering the money with multiple bank transfers, including some through the United States. As his hand-drawn chart grew crowded with boxes indicating the entities involved, Zarrab showed how it took 10 transactions to properly launder the funds.

The money-laundering business was an outgrowth of increasing demand from Iranian customers starting in 2010, as sanctions were beginning to take their grip, Zarrab said. He operated a foreign-exchange business, which he said he learned from his father.

The work for Iran's central bank didn't last long, but he soon picked up business from the foreign-exchange units of two other major Iranian banks -- Bank Mellat and Sarmeyeh Bank. Aktifbank stopped processing his transactions. Then, Zarrab said he realized that revenue from Iran's oil wealth had begun piling up in Halkbank, and he devised a plan to help tap it. Iran sold gas and oil to Turkish companies, TÜPRAŞ and BOTAŞ, both of which have accounts at Halkbank. Turkey couldn't pay Iran directly by dollars due to sanctions. Zarrab's scheme was to take money out of Halkbank.

He started with a jewellery dealer to test a method of using gold trades to convert Iran's oil revenue to cash and move it back. Then he approached Halkbank but the general manager, Süleyman Aslan, refused to deal with him, saying he was too popular. That's when he enlisted the help of Zafer Çağlayan, who asked to be cut in on the deal.

In the laundering scheme, the early steps were the most key, he said, and took place entirely within Halkbank -- the transfer of money from Iranian accounts into the correspondent account of Sarmeyeh, which in turn would make a payment to his company. He would then use it to purchase the gold that would be shipped to Dubai.

Turkey's payment for oil and gas eventually went to Zarrab's company — all transactions until now took place within Halkbank. He would then purchase gold through Royal Group. His couriers used to load suitcases with gold and transport directly to Dubai.

Since Turkey was paying Iran for oil and gas, Turkish customs officials wrote 'Iran' as the final destination of gold. Gold would never go to Iran because Iran under sanctions can't make international payments. Zarrab's operatives would exchange gold with UAE currency dirham in Dubai and make payments to companies on behalf of Iran. Payments were made through different banks like Standard Chartered, as well as American banks.

Prosecutors introduced transcripts of wiretapped phone calls in which Zarrab spoke with others about complications and missteps in the scheme. At one point, according to the transcripts, an Iranian oil company mistakenly sent a transfer of 70 million euros directly to Zarrab. In the calls, Zarrab persuaded a bank official to void the transaction and make it appear as if it never happened, according to the transcript.

Assistant U.S. Attorney Sidhardha Kamaraju asked him if the talks, which included a meeting with Turkey President Recep Tayyip Erdoğan, were successful.

He said he had a meeting with the FBI after he decided to cooperate.

As he testified, Zarrab described his 2016 arrest as he arrived in the U.S. for a trip to Disney World with his wife, Turkish pop star and TV personality Ebru Gündeş, and daughter.

He said he initially lied to U.S. authorities when he was confronted with crimes. "I did not know what I was facing and after a long trip I was shocked and I couldn't give the right answers," Zarrab said. "I was afraid."

Turkish President Erdoğan's Goldfinger Zarrab said the agreement with prosecutors came after a failed attempt by his American attorneys to arrange a prisoner exchange between the United States and Turkey. Two members of his legal team, former New York City Mayor Rudolph Giuliani and former U.S. Attorney General Michael Mukasey, did visit Turkey and met Erdoğan. Both of the lawyers, who have been advisers to U.S. President Donald Trump, were hired by Zarrab also to seek a resolution to the case beyond the courtroom.

He said that as part of his cooperation agreement, prosecutors will tell the sentencing judge the help he has provided. "Cooperation was the fastest way to accept responsibility and get out of jail at once," he said. Zarrab said he pleaded guilty last month to seven charges, including conspiracy, violating U.S. sanctions, bank fraud, money laundering and paying a bribe to a prison guard to get alcohol and the use of a cellphone.

President Erdoğan has personally lobbied Washington to release Zarrab and has linked the case to a failed 2016 coup attempt against him, saying that the same forces, the network of U.S.-based Fethullah Gülen, behind the putsch.

Zarrab was arrested by U.S. authorities in Miami in March 2016 on charges of helping Iran process millions of dollars of transactions when it was under U.S. sanctions for its nuclear program. The case threatens to reopen a case that reached right into Erdoğan’s inner circle. It will also deepen existing tensions between Turkey and the United States. Zarrab was detained and charged in İstanbul in 2013 in a huge corruption case. All charges against Zarrab and those linked to Erdoğan's government were dropped. The U.S. case was built on work initially performed by pro-Fethullah Gülen investigators who targeted Erdoğan over gold trader Zarrab in 2013 in a sweeping corruption scandal that allegedly led to Turkish government officials. The evidence of the case, leaked tapes, elicited by the network of the Gülen, which had been organised in the police, judiciary, military and the other states institutions. Gülen had been a close ally of the then-Prime Minister Recep Tayyip Erdoğan, helping him to redesign and install his Islamic-rooted Justice and Development Party (AKP) in power in 2002. But his alliance with the AKP has faltered in recent years, especially in 2013 when police detained dozens of Erdoğan's key business and political allies over bribery allegations.

Erdoğan has repeatedly accused the network of Gülen, which is also an Islamic cult, of engineering the corruption scandal as well as a string of damaging leaks in the media.