Erdoğan: We need gas and oil from Libya, warships can pass through Canal Istanbul if necessary

In a joint broadcast of Kanal D and CNN Türk, President Recep Tayyip Erdoğan commented on Canal Istanbul, economy and developments in Libya and Iraq 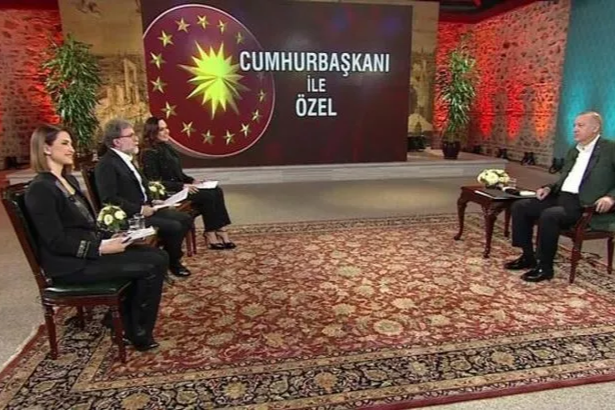 Turkey's President Recep Tayyip Erdoğan spoke in a joint broadcast of CNN TURK and Kanal D on the recent developments, including the economic crisis, military deployment in Libya and the controversial project of the government, Canal Istanbul.

Erdoğan, on the US killing of a top Iranian military leader, Qassem Soleimani, said: "that evening I talked to Trump. About 4-5 hours after our talk, this event happened. It was probably prepared. It had reached that stage. We were shocked when we received the news at that point. In particular, I advised him not to escalate the tension with Iran. I said let's bring stability, peace to the region. Let me make this very clear. Turkey is not only the island of stability in the region but the guarantee of stability."

'WE NEED NATURAL GAS AND OIL, THERE IS AN OFFER FROM LIBYA'

Speaking about the military deployment in Libya, Erdoğan said "We need oil, natural gas. There is such an offer to us from Libya. I already said we would go if there was such a demand. Why wouldn't we go when we were called if Russia's Wagner, Sudan's military are going? The coup plotters called Russia. They are the main legionaries. We will talk about these with Putin."

"Our troops are arriving there gradually. There will be a Lieutenant General to be responsible for the command chain. There are other elements of combatant forces there," Erdoğan claimed.

As the Turkish officials stated that Ankara was ready for the preparations to send troops to Libya, a number of Turkey-backed jihadist groups ─ including Sultan Murad Division, Suqour al-Sham Brigades, and Faylaq al-Sham ─ fighting against the Assad government in Syria would allegedly be transferred to Libya to battle against Khalifa Haftar in the wake of negotiations carried out by the National Intelligence Organization of Turkey (MİT), London-based online news outlet Middle East Eye reported last week.

TKP: Bills to wage wars must be canceled immediately!

'WARSHIPS CAN GO THROUGH CANAL ISTANBUL IF NECESSARY'

The President also claimed that the project did not affect the Montreux Straits Agreement. Answering the question "Will the warships continue to cross the Bosphorus?", Erdoğan said "We will find a solution for this. If necessary, warships can go through the Canal."

Turkey’s President Erdoğan and the AKP government continue pushing the plans of their “crazy project” Canal Istanbul despite opposition. At the center of the debates about Canal Istanbul lie the irreversible environmental destruction and the huge profits that are planned to be made with the project.