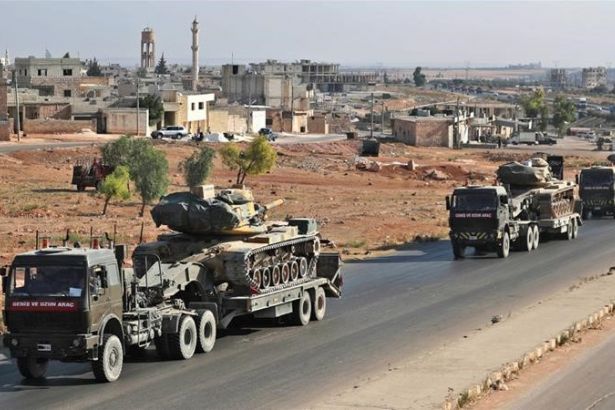 Turkish President Recep Tayyip Erdoğan said on Monday that Turkey is fully prepared to put its own military plans into practice against any stalling in the east of Euphrates River, a planned safe zone in northern Syria, underlining his country’s ground forces will enter the region "very soon".

Speaking at an event to mark the 948th anniversary of Battle of Malazgirt in Turkey’s eastern province of Muş, Turkish President Recep Tayyip Erdoğan stated that Turkey and the U.S. have solved certain disagreements on the establishment of a safe zone in the region, and said: "Our priority is dialogue and cooperation."

"The complication of plans in the region and the abundance of treacherous traps will never prevent us from doing our duty in Syria," Erdoğan also noted, referring to the establishment of the planned safe zone in Syria.

Turkish President’s statements came after Turkish Defence Minister Hulusi Akar’s comments on the U.S.-Turkey Combined Joined Operations Centre on August 24. Akar had said the Combined Joined Operations Centre has become fully operational, claiming that some Kurdish People’s Protection Units (YPG) positions in northern Syria had been destroyed by the U.S. troops as part of the recent deal between Washington and Ankara.

Ankara and Washington periodically fall into a dispute over the policies to be followed in northern Syria.

As the U.S. administration has provided support for Syrian Kurds and their allies within the Syrian Democratic Forces (SDF), including the YPG in northern Syria, Turkey deems the Kurdish presence in northern Syria as a threat to its national security.

The Turkish government considers the Democratic Union Party (PYD) and its armed force YPG as terrorist organizations affiliated to the Kurdistan Workers’ Party (PKK), the Kurdish insurgents inside the country.

LAVROV: ‘SYRIAN ARMY DOES NOT VIOLATE ANY AGREEMENTS WITH TURKEY’

Upon a question posed by a journalist at a press conference on Monday, Russian Foreign Minister Sergei Lavrov defended the Syrian army’s operation against Turkey-backed jihadists in Khan Sheikhoun in the northwestern region of Idlib.

"Moscow-backed operation did not violate any agreements with Turkey. I would like to remind you that Russian President Vladimir Putin also repeatedly told there are no violations," Russian Foreign Minister stated.

Lavrov also said that Russia suggested Turkey carry out a joint patrol in Idlib, but the parties could not reach an agreement yet on this issue.

"Of course, Syrian army and Russia would attack against the targets that threaten the Syrian territory and our military airbase in Khmeimim," he underlined.

Stating that "No one has reached an agreement that Syrian and Russian forces would not respond to the attacks carried out by terrorist groups", Lavrov noted: "It was entirely legitimate that the Syrian army has eliminated the terrorist nest in Khan Sheikhoun. It was also necessary for the goals set by the United Nations Security Council on Syria."

On August 23, following the liberation of Khan Sheikhoun by the Syrian army, a strategic town in Idlib, Turkish President Recep Tayyip Erdogan had told his Russian counterpart Vladimir Putin that the military operations carried out by the Syrian Arab Army (SAA) in northwestern Syria would cause a humanitarian crisis and threaten national security of Turkey.

During its operation to liberate Khan Sheikhoun and advance into Jarjanaz located in Maarrat Al-Numan, the Syrian forces have encircled jihadist groups and a Turkish military observation post in the region.

Turkish Defence Minister Hulusi Akara had claimed on Saturday that the Syrian offensive in Khan Sheikhoun is a "ceasefire violation" and against the agreements on the status of Idlib settled over in the Astana Process.

Yet, military operations conducted by the SAA since the early August in the south of Idlib cannot be considered as ceasefire violation, considering the region is controlled by factions of al-Qaeda-affiliated Hayat Tahrir al-Sham (HTS) led by al-Nusra Front.

One of the main commitments Turkey has stipulated was that the "moderates" be excluded from jihadist groups, according to the Astana process launched in 2017 ─ which aimed at ending the Syrian conflict. However, this was not technically feasible and was proved in January 2019 after an internal conflict between the HTS and the Turkey-backed jihadist groups Ahrar al-Sham and Sukkur al-Sham.