Erdoğan, Putin meet to talk over regional crises before launch of TurkStream pipeline

Turkish President Recep Tayyip Erdoğan met with his Russian counterpart Vladimir Putin in Turkey’s Istanbul on Jan. 8 to discuss regional developments ahead of the official launch of TurkStream pipeline 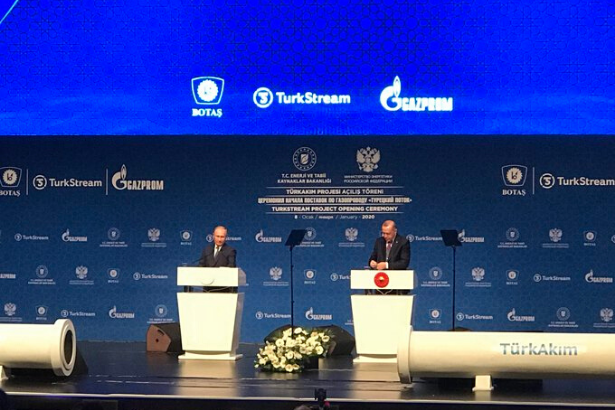 Turkish President Recep Tayyip Erdoğan and Russian President Vladimir Putin on Wednesday met in the opening ceremony of the TurkStream pipeline project, which will carry Russian gas to Europe via Turkey.

As Bulgarian Prime Minister Boyko Borisov and the Serbian President Aleksandar Vucic also attended the ceremony, Erdoğan and Putin held a closed-door meeting at Istanbul Haliç Congress Center for nearly one and half hour. The Turkish President presented a book to his Russian counterpart called "A Strategic Step on the Eastern Mediterranean Equation: The Turkey-Libya Deal", it is reported.

The two leaders also talked over the escalating tensions between the US and Iran as well as the recent developments in Libya and Syria.

For the Erdoğan-Putin meeting and the official launch of TurkStream, security measures were very high in Istanbul. A total of 7,200 police officers, 300 special operations team and 30 bomb squads supported by police helicopters, marine boats, and armored vehicles were on duty for the ceremony.

After the Erdoğan-Putin meeting, the opening ceremony of TurkStream started.

PUTIN: ‘OUR COOPERATION DEVELOPS DESPITE EFFORTS TO PREVENT IT’

Stating that the cooperation between Ankara and Moscow is developing despite the efforts of foreign actors to prevent it, Russian President Vladimir Putin said, "The materialization of this joint project, TurkStream, gradually proceeds as installing gas pipelines at the bottom of the Black Sea."

"Our Turkish partners bought 24 billion cubic meters only last year. Now there will be a new route, TurkStream," he added.

"Two parallel pipelines were installed at the bottom of the sea, and each of them has a capacity of 16 billion cubic meters. Its depth exceeds two kilometers, which is not an easy work at all," the Russian President continued.

The natural gas, which will be carried through the first pipeline of TurkStream, will come from Western Siberia, while the natural gas to be transported through the second pipeline will be delivered to the Balkans, particularly Bulgaria and Greece via Turkey.

Russian President Vladimir Putin also noted that the dispatching of Russian gas to Europe will not only have a positive impact on Turkey but also on the economy of many Southern European countries.

As the energy experts warn that TurkStream project has paved the way for an asymmetrical dependence between Moscow and Ankara due to Russian-dominated agreement, Russia seeks to reduce its reliance on Ukraine as a transit country to Europe with alternative pipeline projects. Moscow, which exported nearly 200 billion cubic meters to Europe last year, has been supplying gas to the Balkans and Turkey via Ukraine, Moldova, and Romania.