Turkish President Recep Tayyip Erdoğan has given a photograph, during his visit to the National Defense University, in front of a map called 'Blue Homeland' that depicts Aegean islands as belonging to Turkey 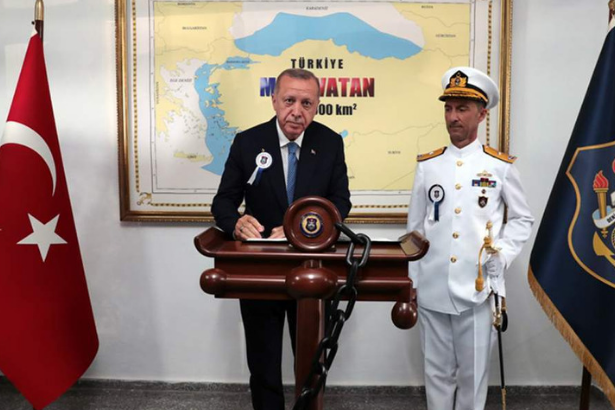 Turkish President Recep Tayyip Erdoğan has been photographed with a map that shows nearly half the Aegean Sea and the maritime region up to eastern Crete as belonging to Turkey.

The map shows some 462 thousand square kilometers from the east coast of Crete as belonging to Turkey.

The photo has been posted on the official presidency website, depicting Erdoğan signing the guestbook at the National Defense University in front of the map.

The Turkish Navy had conducted massive drills with the codename “Blue Homeland" between Feb. 27 and March 8, 2019, to test its warfighting capabilities in the Black Sea, Aegean Sea, and the Mediterranean, it was reported by the state-run Anadolu Agency. The "Blue Homeland" is also a geopolitical concept that manifests Ankara’s political-military agenda in the coming decade, it was reported.