Erdoğan to Macron on drilling activities: Who are you to talk?

Turkish President Erdoğan has responded to the remarks made regarding Turkey's oil research activities in the eastern Mediterranean, mentioning that the activities would continue and asked the French President Macron “who do you think you are?” 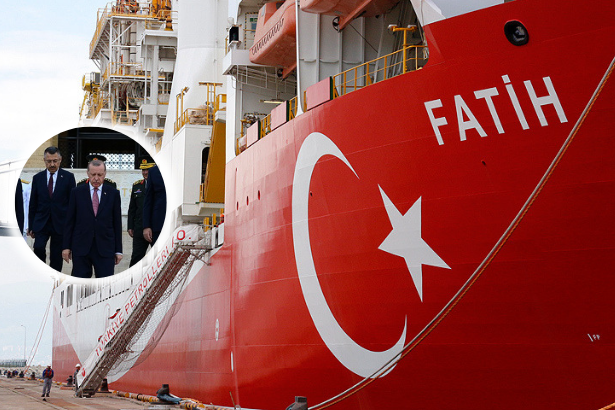 This week, Erdoğan attended to Award Ceremony of Council of Exporters and addressed to the General Assembly. A part of Erdogan’s speech was related to oil and natural gas research Turkey conducts in the East Mediterranean.

Erdoğan, in his speech, responded to French President Emmanuel Macron who stated: “Turkey needs to end the illegal activities within Cyprus’s economic zone”. Erdoğan said, “if anyone gives Turkey a black look, we will continue our activities with our fighter planes and frigate ships if necessary.”

Erdoğan continued his words to the French president, “who are you to talk about this issue? Turkey is a guarantor in Cyprus with Greece and Britain.” The Turkish president also responded to the threats regarding intervention to Turkish fleet near Cyprus, saying “they are threatening to arrest the personnel on the ships, you will be left empty-handed, who do you think you are arresting?”

Erdoğan mentioned that 4 ships are in the Eastern Mediterranean and added, “We are conducting our research activities within our area.”

Within the area where Egypt, Israel, and Cyprus conducts drill and search, neither the search nor the drilling activities are not undertaken by the companies of these countries. Companies like ExxonMobil, Qatar Petrol, Total, Noble (Israel-US partnership) and ENI (Italian) determine the axis of East Mediterranean oil politics.

Turkey’s initiative in this issue seems to have no meaning or aim in order to enter the above-mentioned status quo, however, it may be argued that Turkey under Erdoğan's rule is inclined to use its political/military efficiency in order to obtain a supply of products with more suitable conditions. The mentioned exploration activities were hastened after the newly signed agreements by Cyprus.

Erdoğan has spoken in a conference he held at the beginning of this month and said: “The newly bought drill vessels are reaching the region. A frigate ship of our armed forces has also reached the area for the protection of the vessels. Our Turkish brothers in the North of Cyprus have rights on any oil or other products to be extracted within the region as well as South of Cyprus. We will not allow them to forget about these rights. Other than this, we also have rights in the region".

On the other hand, Turkey has a special place as a market in terms of oil and natural gas production in the East Mediterranean. The case that Turkey is one of the countries which the products to be extracted in this region can be transported easiest and cheapest, strengthens the statement of Turkey.