Erdoğan continues to market Turkey as he meets Siemens CEO 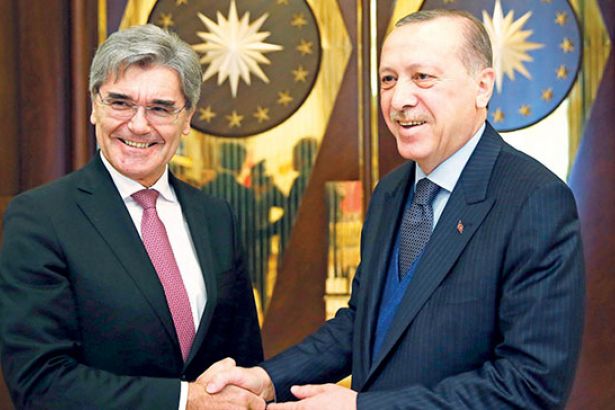 The meeting at Erdoğan’s palace came in the same day as German Chancellor Angela Merkel hosted Turkish Prime Minister Binali Yıldırım in Berlin on Thursday. The two PMs talked on Turkish-German relations over jailed journalists in Turkey in an attempt to intensify the relations between the two countries.

The agreements between Erdoğan and Siemens show that the mutual capitalist relations are of importance despite the hypocritical diplomatic tensions and crises between Turkey and Germany. Previously, German Foreign Minister Sigmar Gabriel said that Germany would reconsider its economic policy towards Ankara as well as credit and investment programs over the arrests of rights activists in Turkey.

As the governing Justice and Development Party (AKP) and President Erdoğan rule Turkey as a CEO of a capitalist entity for the benefit of local and foreign monopolies, worldly known German company Siemens is interested in Turkey's 'national' high-speed train project. Accordingly, the tender-winning company will transfer its technology on the production of high-speed trains to a Turkish company.

However, Turkey will import a set of 20 high-speed trains in the first phase with only 10% of local contribution to the production. As the second phase projects to import 60 trains with a local productivity rate of %53, sets of trains will be produced in Turkish facilities with specific designs at the rate of %74 “locality” in the third phase.

As Erdoğan's AKP government vows to turn the Turkish economy into a 'national' model, the president continues to hold meetings with CEOs of local and worldwide capitalist companies and monopolies, showing that his government is assertive in prioritizing capitalist relations.

Widely known with a former statement of him, "I am liable to market my country", President Erdoğan acts like a CEO of Turkey. AKP government sold many industrial assets of the country to foreign and local capitalists and privatized local economy.

Tending to pro-capitalist shows, Erdoğan also welcomed Elon Musk, the CEO of Tesla Motor and SpaceX, at his palace in November 2017. Following Musk’s Turkey trip, it was announced that Turksat 5A satellite would be launched by SpaceX.

Most of Turkey's assets in the field of oil, energy, telecommunication, education and health have been privatized during the rule of AKP.

Kemal Okuyan writes on crisis between Turkey and Germany