Turkish President stated that Turkey hosts more than 4 million refugees, while his government policies managed to reduce irregular migration from Turkey to Europe by 99% 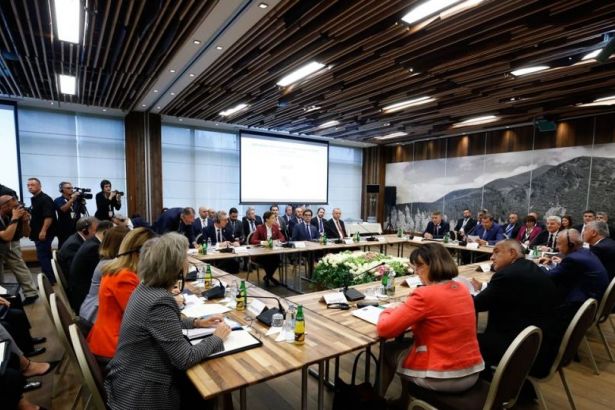 "We have spent over $37 billion for the Syrian refugees alone, according to the United Nations data. Our country has ranked first in the world in terms of human development aid compared to its national income within the last two years," he stated.

"Thus, we have made an invaluable contribution to the security of the entire European continent, especially to the Balkan countries. Yet, we did not see the support and humanitarian attitude that we expect from our European friends during this difficult time," he continued.

Saying that the neighboring countries to Syria, like Turkey, and the transit zones, like the Balkans, were forced to undertake all this burden of irregular migration flow alone, Turkish President stated that financial commitments promised by the European countries regarding the Syrian refugees have not been fulfilled.

The EU had committed a €6-billion aid package to help Turkey for keeping millions of refugees in the country and preventing their irregular migration to Europe. However, Turkish President Recep Tayyip Erdogan claimed that Turkey has so far received only a part of the committed amount, which is €2.5 billion.

Congratulating Bosnia and Herzegovina who holds the Presidency of SEECP, Turkish President Recep Tayyip Erdogan said, "The success of SEECP is important not only for our countries [participating countries], but also for the peace, stability, and prosperity of the entire European continent."

Erdoğan underlined that the process has also made very significant contributions to the integration of Balkan countries with Euro-Atlantic institutions.

"Turkey has always provided and will continue to provide support for the integration of Balkan countries with Euro-Atlantic institutions," he also said.

Warning that the decisions taken by the European Union (EU) about the accession negotiations of North Macedonia and Albania would directly affect the future of the entire region, Turkish President Recep Tayyip Erdogan said that if the EU conducts this process in contradiction with its commitments, it will harm the regional peace and stability as well as the Union’s own credibility.

"In recent years, we see that the EU enlargement policy has been captured by narrow-minded populist circles. The discriminatory movements that spread across the continent have been not only a threat to the inner peace of Europe but also a danger for the future of the region and its potential for being hope," he added.

Turkey’s President also said that he believes European leaders will act in a visionary way, supporting the ideal of Balkan integration into the European Union.

Expressing his appreciation from building consensus regarding the Presidency of Turkey for the SEECP between 2020-2021, Erdoğan stated that Turkey would focus on particular issues such as migration, human resources, intra-regional transportation and communication networks across the region.

A research carried out last year showed that most of the Syrian refugees in Turkey are employed informally without work permits in favor of capitalists, facing severe discrimination as they are forced to work longer hours for lower wages.

Academic Gökçe Uysal, the Deputy Director of Bahçeşehir University Economic and Social Research Centre, said that only 20 thousands of refugees have work permit despite the total number of 4 million refugees across Turkey since the capitalists often opt for employing the immigrant workers informally.

According to a recent investigation initiated by The Parliamentary Commission on Migration and Integration, refugee/migrant workers generally work weekly and uninsured in Turkey. The wages start from 200 TL (36 USD) per week depending on their age and experience, and the wages of a small minority can reach up to 600 TL [110 USD].

For child workers, the wages vary from 20 TL (3.5 USD) per day in waste collection to 200-250 TL per week in furniture workshops, the report prepared by Ankara Occupational Health and Safety Council after five Syrian workers were killed by a fire broken out at a furniture factory in Ankara in January 2019.

Moreover, only six out of every 10 Syrian refugee children at the age of compulsory education can actually access education in Turkey, according to the Ministry of National Education (MEB) data.