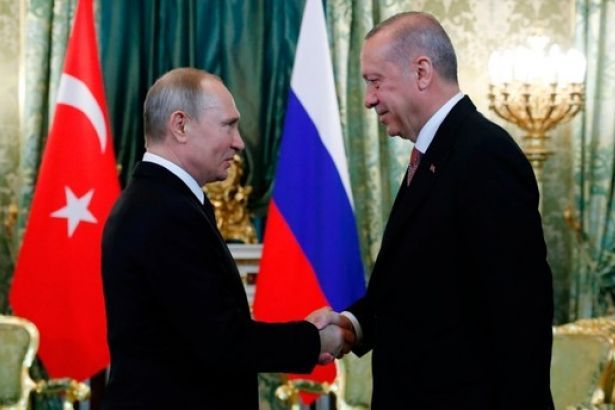 The Turkish President Recep Tayyip Erdoğan and his Russian counterpart Vladimir Putin had a phone conversation on Monday regarding the recent military operations carried out by the Syrian Armed Forces (SAF) against the jihadists in Syria’s Idlib.

Making a statement about the talks between Erdoğan and Putin, the Turkish Presidency’s Communications Director, Fahrettin Altun, said: "Our President Recep Tayyip Erdoğan made a phone conversation with the Russian President Vladimir Putin [on Monday evening]. In addition to the bilateral relations between Turkey and Russia, the recent developments in Idlib were discussed in this conversation."

According to Altun’s statement, during the talk, Erdoğan noted that the ceasefire violations against the tension reduction zone determined for Idlib had reached alarming dimensions for the last two weeks, and that it was not possible to explain targeting civilians and the destruction of schools and hospitals in the region on the pretext of war on terrorism.

Erdoğan also claimed that the aim of the Syrian government was to sabotage the Turkish-Russian cooperation in Idlib, and to undermine the spirit of Astana [the peace process launched in January 2017 by Russia and Iran as the allies of the Damascus, and rebel-backer Turkey with the aim of ending the Syrian conflict], according to the sources.

According to the official statement made by Altun, the Turkish President Erdoğan claimed that the escalation of tensions in Idlib had put the formation of the Constitutional Committee at risk and the disruption of the political process in the country.

The Constitutional Committee is of particular interest to the United Nations (UN) which favors a Syrian-led resolution to the conflict, and the committee to form a constitution was agreed on at the Syrian National Dialogue Congress held in the Russian Black Sea resort of Sochi on January 30, 2018. According to the UN plan, the committee would have 150 members: 50 chosen by the government of the Syrian President Bashar al-Assad, 50 by the ‘opposition’ and 50 by the UN as well as technical experts and representatives of civil society.

In addition to these, Altun noted that both presidents, Erdoğan and Putin, have confirmed their commitment to the Sochi Memorandum, while Erdoğan said important progress had been made in the implementation of the memorandum, despite the fact that the military operations carried out by the Syrian army may harm common interests.

In early May 2019, the Syrian forces launched a military operation against the jihadists and Turkey-backed rebels in Idlib under the control of Al-Qaeda affiliated Hay’at Tahrir al-Sham. As a result of this operation, the Syrian army advanced in Idlib and northern Hama, capturing some of the strategic positions.

On May 12, Abu Mohammad Al-Jolani, the infamous commander of Hay’at Tahrir Al-Sham, admitted that his jihadist group had lost its bases in Hama to the Syrian Arab Army (SAA) due to the lack of support given to them by the local population.

Upon the Syrian army’s progress in jihadist-controlled territories, Turkish Defence Minister Hulusi Akara had said that the Syrian forces should return to the territories agreed in an international deal in Kazakhstan to reduce hostilities and casualties, noting the attacks pose a threat to the security of Turkish observation posts in the northwestern side of the region, Al-Masdar News reported on May 12.