Turkey's President Recep Tayyip Erdoğan talked at the funeral of a Turkish soldier killed in Syria's Afrin operation, vowing that the Turkish nation will triumph with the 'Free Syrian Army' jihadists 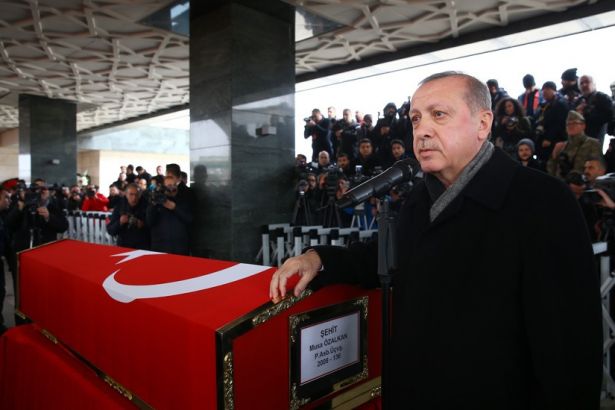 Turkey's President Recep Tayyip Erdoğan attended on Jan. 23 the funeral ceremony of Turkish soldier Ahmet Özalkan who was killed on Monday in Turkey’s Afrin operation in Syria. Erdoğan said, "We will win with the Free Syrian Army [FSA]."

Erdoğan delivered a speech at the funeral although talking ceremonies are regarded unusual and disturbing among Sunni Muslims. He was previously criticized for delivering a speech and abusing martyrdom for his political manoeuvres at the funeral of a police officer in November 2015, which he turned the ceremony into a political propaganda rally again as he spoke whilst laying his hand on the coffin.

"OUR NATION WILL WIN WITH THE FSA"

Talking about Özalkan, Erdoğan said, "Musa Özalkan is our first martyr in Afrin operation. Our army is continuing its great struggle within a chain of very important operations. Against who? Against terrorists. Our nation will win and triumph with the FSA."

"We are determined. We have no time to listen to what other countries say about our operation. This decision was taken by our nation," he added. When the Afrin operation was launched, however, the Erdoğan said, "They will learn that they will not be able to find any other ally than Turkey in this region," in an attempt to protect the alliance with the U.S.

As President Erdoğan's AKP government declared on the onset of the Afrin operation that this military campaign would concrete to the territorial integrity of Syria, Erdoğan's funeral talk in praise of the FSA has revealed the true intention of the government. Ankara-backed FSA is known to have carried out many brutal actions against the Syrian government and civilians in defiance of Syria’s integrity.

Three Turkish soldiers were killed on Jan. 22 and 23 in Ankara's operation, dubbed "Olive Branch," against Kurdish YPG forces in the northern Syrian district of Afrin.