The General Secretary of the Turkish Employers' Association of Metal Industries (MESS), Özgür Barut, spoke on the collective bargaining process with trade unions, saying that if no agreement comes out of the process the government will ban the unions to go on strike 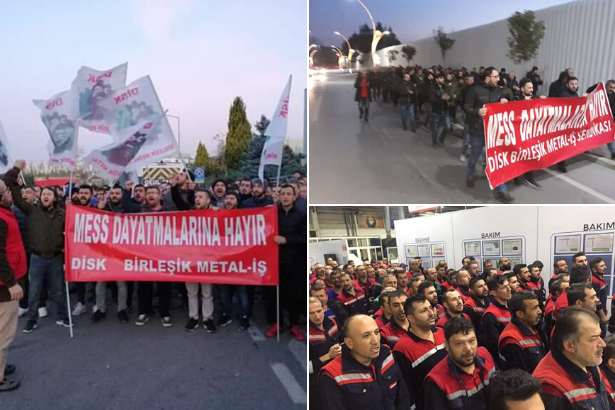 The general secretary of Turkey's employers' association in the metal sector, Özgür Barut, made statements on a TV program about the group collective agreement process.

Metalworkers in Turkey start a series of demonstrations for their rights

Barut, in his speech, claimed that the demands of metalworkers were far from reality and threatened the workers with layoffs, saying that "if a contract that is far from “economic facts" was signed, there would be layoffs."

"Since we sit at a collective bargaining table every two years, investors cannot see next two years. It prevents us from attracting investment," the representative of the capitalists said, adding that the employers demanded the process to be renewed every three years.

Barut, in his statements, reiterated his proposals that attack the acquired rights of workers, such as increasing the trial period from 2 months to 4 months and giving bonuses depending on the continuity of the workers.

The representative of the employers also added that if the agreement is not reached and the unions decide to strike, the strike will be banned by the Turkish government on the grounds that it will threaten national security and the contract will go to the Supreme Arbitration Board (YHK).

The MESS representative's statement that the strike will be banned while the collective bargaining process has not yet reached to conclusion shows that the biggest assurance of the bosses is the ruling AKP's "strike ban" which violates the constitutional right of workers.

Following the uncompromising and aggressive attitude of MESS in the collective bargaining negotiations, the metalworkers started their actions in the factories. The metalworkers declared that they would not submit to the imposition of the bosses and the threats of the strike ban with their organized resistance.