Embroidery workers in Turkey's İzmir fighting for their rights

Embroidery workers of Çelik Nakış factory, working with international textile giants such as ZARA, H&M, Bershka, Tommy Hilfiger, Mango and Decathlon, decided to struggle for their rights after the factory’s embroidery division has been shut down by the employer 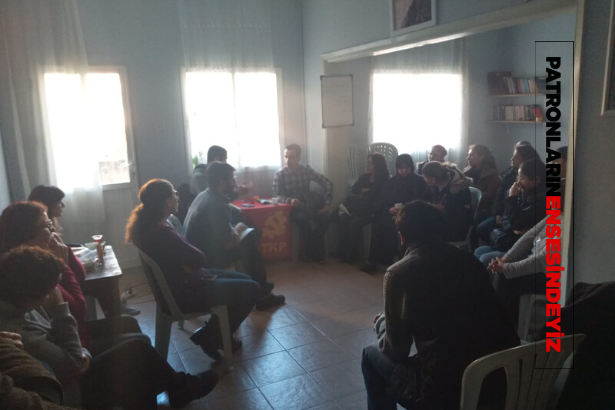 Embroidery workers, who worked for Çelik Nakış factory with a total of approximately 130 workers located in Turkey’s western province of Izmir, have been destitute of their rights following the embroidery division of the factory was shut down by the employer in August 2019.

Osman Çelik, the owner of Çelik Nakış factory, who entrenched upon the workers’ rights, told the workers that their salaries would be paid by partner companies, trying to evade his responsibility. Upon this, workers visited Üniteks, one of the partner companies working with Çelik Nakış factory, in order to tell the situation, but the Üniteks authorities did not give them the time of day.

After all, the embroidery workers contacted the Communist Party of Turkey (TKP)’s "We Breathe Down Bosses’ Neck" solidarity, communication, and struggle network, and decided to fight together with the PE against the capitalist exploiters of Çelik Nakış factory until they get their rights.

The workers of the SIMO textile, who have recently won their struggle against the subcontractor of Sun textile which works for international brands like Zara, Bershka, M&S, Esprit, Next, Tesco, Amazon after their resistance in front of the factory in İzmir Çiğli Atatürk organized industrial zone, were also in solidarity with the embroidery workers of Çelik Nakış factory.

"Those responsible for the usurpation of our rights are particularly Osman Çelik, the owner of Çelik Nakış factory, and his partner companies Üniteks, Cu Textile, ZARA, H&M, Bershka, Tommy Hilfiger, Decathlon and Mango. We will not allow anyone, any brand or any company that has become rich by exploiting our labor to evade responsibility," the workers said in a statement.

Underlining that they won’t leave their salaries they deserve to the employers, the embroidery workers concluded, "We will not renounce our unpaid salaries, severance and notice pay, overtime and vacation payments."

In November 2019, SIMO textile, whose boss stated that he went bankrupt, dismissed the workers without paying their salaries and compensation. The workers had contacted the "Breathe Down Bosses’ Neck" (PE) platform initiated by TKP and decided to act together. Later, the workers undertook an action on November 15 and declared their demands.

The resistance of SIMO textile workers in solidarity with the PE in front of the factory had resulted in a gain in late December, as all the demands of the dismissed workers, including salaries and overtime wages, have been transferred to their bank accounts.