Egypt prepares for military intervention in Libya, as Turkey urges US to play more active role in political talks

Egypt has now the right of international legitimacy, based on the United Nations Charter, to militarily intervene in the Libyan crisis, Egyptian President Abdel Fattah al-Sisi said following the request of Libyan tribes for military support to defend Libya and preserve its sovereignty and resources 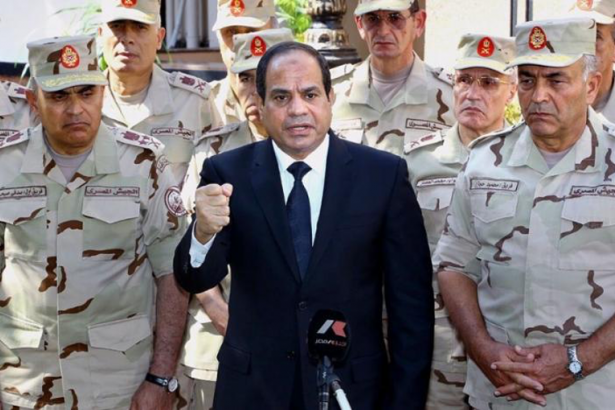 Egyptian President Abdel Fattah al-Sisi said in a speech on television on Saturday that direct military intervention of Egypt in neighbouring Libya has now international legitimacy to protect Egypt’s 1,200-kilometre western border, helping achieve a ceasefire, and restoring stability and peace in Libya. UN-recognized Government of National Accord (GNA) under the leadership of Fayez al Serraj backed by Turkey has denounced Egypt’s possible military intervention in the country, labelling it a ‘‘declaration of war’’.

Any military intervention to be carried out by the Egyptian forces in Libya would be advanced with Libyan tribal leaders at the vanguard, al-Sisi stated after inspecting military units at an airbase near the border with Libya, called The Western Military Region.

Telling that Egypt does not have any intention to occupy Libya, Egyptian President al-Sisi noted that Cairo only wants the stability of the country and added, ‘‘We will not be an intruder. We only want the stability, security and development of Libya.’’

Urging all Libyan and foreign parties in Libya to respect the existing borders and start political negotiations, al-Sisi also issued a warning that the strategic cities of Sirte and al-Jafra are the ‘‘red line’’ for Egypt’s national security.

Egypt is working towards a comprehensive conflict resolution in Libya for the elimination of terrorist militias and supporting peacekeeping operations in the country by attending international conferences under the auspices of the United Nations (UN) to implement the resolution of the Berlin Conference held in January 2020 and the Cairo Declaration, al-Sisi reminded and claimed the Cairo Declaration is compatible with these international efforts for peace.

Stating that foreign interventions against Libya also affect regional and international security, the Egyptian President told, ‘‘The foreign powers are attempting to violate the sovereignty of Arab countries, as they do not want stability in the region and contribute to the terrorist activities.’’

In the Libyan conflict, Egypt backs Khalifa Haftar’s Libyan National Army (LNA), the military leader based in Tobruk whose 14-month offensive to seize Libya’s capital Tripoli under the GNA was thwarted largely because of Ankara’s direct military support to the UN-recognized government. General Haftar had to withdraw its forces from Tripoli’s outskirts following Turkish drones inflicted losses on the battlefield.

Mansour Basisi, a representative of the Libyan tribes loyal to eastern forces under the command of General Khalifa Haftar’s LNA, called on Egyptian President al-Sisi to defend Libya and preserve its sovereignty and resources on Saturday.

Stating that the Egypt and Libya’s securities are one and the same due to the blood ties between the two countries and their deep societal relations, Basisi underlined that the tribes in the country provide unlimited support to the Libyan leadership represented by Aguila Saleh Issa as the President of Tobruk-based Libyan House of Representatives and General Khalifa Haftar, the commander of the LNA.

The tribes reject any foreign interference in Libya’s internal affairs and any designs on its resources, Mansour Basisi also highlighted.

Saying that ‘‘Libya is a sovereign state and no country is allowed to act that would pose a threat to its lands or its sovereignty, borders and resources’’, Mansour Basisi urged the Arab League, the UN, the EU, the African Union, international human rights organizations and NGOs to be in solidarity with the Libyan people against the aggressors and occupying forces.

Upon this call, the Egyptian President al-Sisi told that his army is ready to support Egypt’s Libyan brothers and to provide the tribes with training and arm the tribes to fight the terrorist militias and defend their country, underlining that the military intervention of Egypt in Libya has now acquired international legitimacy.

Cairo has been concerned about the intervention of Turkey in Libya, because it considers Turkey a regional opponent due to Ankara’s support for the jihadist Muslim Brotherhood, which al-Sisi overthrew by a coup d’etat in Egypt in 2013.

Saudi Arabia and the United Arab Emirates (UAE) expressed support for the statements of Egyptian President al-Sisi regarding military intervention in Libya.

Urging the international community to pay attention to the call of Egyptian President al-Sisi, the Saudi authorities, from the official news agency of Saudi Arabia, said, ‘‘Saudi Arabia takes side with Egypt and supports its right to protect its borders and people.’’

The UAE’s Ministry of Foreign Affairs and International Co-operation said on Sunday that it stands in solidarity with Egypt ‘‘in all measures taken to safeguard its security against alarming developments taking place in the brotherly state of Libya.’’

In its statement, the ministry also highlighted the recent efforts by the President al-Sisi to initiate political talks under auspices of the UN with a proposed road map referred to as the Berlin Conference and the implementation of the Cairo Declaration.

Bahrain also supported al-Sisi and Egypt’s position in Libya, noting that Cairo has the right to defend its national security against dangerous developments in Libya.

‘‘Bahrain affirms Egypt’s determination to protect and secure its western borders with their strategic depth from the threats of the terrorist militia and mercenaries,’’ the Ministry of Foreign Affairs for the Kingdom of Bahrain said in its statement.

Criticizing the Egyptian President al-Sisi’s statements, UN-recognized GNA backed by Ankara, Abdulhadi Dirah, the Spokesperson of the Sirte-Jufra Joint Operations Unit under GNA, said that al-Sisi’s remarks are an open intervention in Libya’s internal affairs and labelled it an ‘‘open declaration of war’’ against Libya.

Khalid al-Mishri, the Chairman of the High Council of State ─ an advisory body to the GNA founded in December 2015 ─ also noted, ‘‘The statements made by al-Sisi are intolerable. This is an open intervention in internal affairs of Libya and violating its sovereignty.’’

In addition to these, the Libyan parliament based in Tripoli called on the GNA to be at full readiness against ‘‘military aggression’’ from Egypt, denouncing recent comments by the Egyptian President regarding the military intervention in Libya.

ANKARA URGES THE US TO PLAY MORE ACTIVE ROLE IN LIBYA

Although the GNA had announced last week that the seizure of the strategic city of Sirte is ‘‘imminent’’, the LNA expressed that they recaptured some areas around Sirte, shot down the four Turkish drones, destroyed one Turkish air defence system, and strike a military convoy.

As this uncertain military situation continues in Libya, Turkey’s ruling Justice and Development Party (AKP) gave so-called messages for ‘‘consolidating a peace process’’ in various meetings with the US, Germany and Italy.

Yet, Turkish Foreign Minister Mevlüt Çavuşoğlu had labelled the call of Egypt’s President al-Sisi and the LNA leader Khalifa Haftar for a truce in Libya as a ‘‘stillborn proposal’’ in January.

The US needs to play a more active role in Libya in achieving a ceasefire and in political talks, Çavuşoğlu stated last week, as the warring parties in Libya restarted UN-led ceasefire talks.

Even though the US administration has expressed it is against the offensive carried out by Khalifa Haftar’s forces, it has not explicitly supported the GNA so far.

‘‘The involvement of the US as a NATO ally is so important to protect the alliance’s interests,’’ Turkish FM Mevlüt Çavuşoğlu also said, adding that Turkish and US officials would discuss possible steps that can be taken regarding the Libyan conflict.

Following the Turkish Foreign Minister’s remarks on the need for a more active role of the US in achieving ceasefire and the political process in Libya, Turkey’s Vice President Fuat Oktay also expressed that working together with Washington for peace process would make a positive impact.

According to the statement made by the Foreign Ministry of Russia, during the talks, Lavrov told that a military solution to the Libyan crisis is impossible, stressing the necessity of reaching an immediate ceasefire and beginning a political dialogue between the warring parties in accordance with the decisions taken at the Berlin Conference.

Egypt, along with the UAE and Russia, supports the LNA fighting against the UN-recognized GNA directly backed by Turkey in the field.

Some sources had claimed that Russian FM Sergei Lavrov’s decision to postpone his visit to Turkey last week was the military operation plan of the Ankara-backed GNA to Sirte.

WHAT HAPPENED IN LIBYA?

Following the crisis erupted on crude oil and gas exploration in the Eastern Mediterranean among Egypt, Greece, Cyprus, France, UAE and Turkey, Turkish President Recep Tayyip Erdoğan on November 27 signed ‘‘the Security and Military Cooperation’’ and ‘‘Restriction of Marine Jurisdictions’’ agreements with the GNA leader Fayez al-Sarraj, and announced that Ankara supports the GNA against the LNA under the leadership of Khalifa Haftar.

The maritime deal aimed at blocking Greece’s access to the oil reservoirs in the Eastern Mediterranean. Immediately after the signing of the contract, the Turkish parliament approved a bill to deploy troops to Libya. Particularly Egypt, UAE, Saudi Arabia, France and Russia back Hafter forces in the region. After the signing of the agreement, the LNA had shown a rapid military advance in the country.

Upon the advance of the LNA towards the capital, Tripoli, under control of the GNA, two conferences for achieving ceasefire and peacekeeping were held in Berlin and Moscow, but Khalifa Haftar nullified the ceasefire agreements after returning to Libya.

After the efforts for ceasefire remained inconclusive, Turkey has begun to send arms, weapons and military equipment to the GNA in Libya by violating all international agreements, while Ankara continued to transfer its jihadist mercenaries in Syria to Libya to fight the LNA.

Last week, the GNA forces accelerated its advance in the country, announcing that it has regained full control of the Tripoli airport on June 4.

As agreements and calls for a ceasefire in Libya are at the agenda of the warring parties and their supporters once again, it is remarkable that Italian Foreign Minister Luigi Di Maio and his Turkish counterpart Mevlüt Çavuşoğlu called for ‘‘joint action for permanent peace’’ in Libya in a joint press conference, immediately after the signing of an agreement on the delimitation of maritime boundaries between Italy and Greece on June 9.

Following the signing of the agreement, the Greek Foreign Minister Nikos Dendias had stated, ‘‘The delimitation of maritime zones is accomplished with valid agreements, not with invalid ones like that signed by Ankara and the GNA of Fayez al-Sarraj, and with maps unilaterally submitted to the UN.’’