Egypt is capable of changing military scene in Libya: El-Sisi

After Tobruk-based of Representatives has requested the military intervention of the Egyptian Army, Libya's tribal leaders and Egyptian President El-Sisi held a meeting under the slogan "Egypt and Libya… one people, one fate." 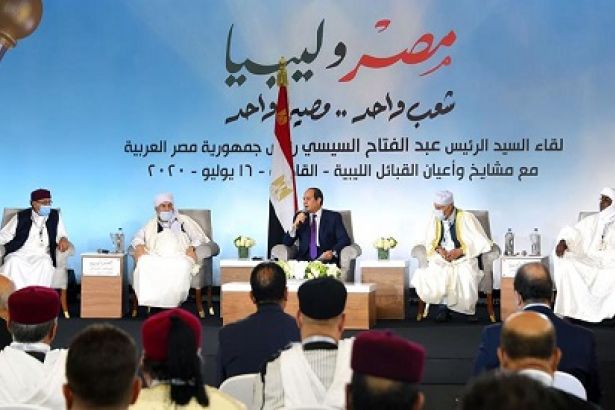 The Tobruk-based House of Representatives (HoR) has requested a military intervention from the Egyptian army in Libya against the UN-recognized Government of National Accord (GNA) openly backed by Turkey.

Last week, Turkish Foreign Minister Mevlüt Çavuşoğlu had said that the Tripoli-based GNA is ‘‘determined’’ to resume its offensive against General Khalifa Haftar’s Libyan National Army (LNA) if they do not retreat from the strategic port city of Sirte and Jufra, home to a large airbase in the centre of the country.

As Turkey's presence in Libya through the Tripoli-based government has been criticized by the Tobruk administration in the east and its supporters, the pro-Hafter House of Representatives based in Tobruk announced that they would allow Egypt to intervene in the country.

The pro-Hafter Tobruk House of Representatives announced that they would allow Egypt to intervene in the country. The statement made by the House of Representatives headed by Akile Saleh denoted, "If the Egyptian government sees some dangers in Libya and Egypt's security, we would be pleased with the military intervention of the Egyptian army to ensure national security in the region". The statement said, " Libya and Egypt are two brother countries, and they can take joint action to protect national security against occupying forces in Libya. Turkey's occupant behaviour poses a great danger for Libya and the neighbouring country Egypt.” Tobruk's move came after Foreign Minister Mevlüt Çavuşoğlu said, "There is military preparation if the forces of Hafter do not withdraw from Sirte."

Libya's tribal figureheads visited Cairo on Thursday and mandated President El-Sisi and Egypt's Armed Forces to intervene to protect the sovereignty of Libya and to take the necessary measures to secure the national security interests of both countries.

During his meeting with the Libyan tribal leaders loyal to the Tobruk-based HoR, the Egyptian President El-Sisi said, ''Egypt is capable of changing the military scene in Libya and it has the strongest army in the Arab world and Africa.”

El-Sisi stated that Egypt is ready to train Libyan youth in Egyptian military academies so they would be the core of the Libyan army. He reiterated Cairo's rejection of foreign interventions in Libya which aim to steal Libyan wealth.