ECI: "Socialism or barbarity" is more timely than ever

Communist and workers' parties exchanged information regarding the health systems and labor rights in the European countries, the measures of the bourgeois governments, the EU, and the attack of the capital, at the teleconference of the European Communist Initiative. 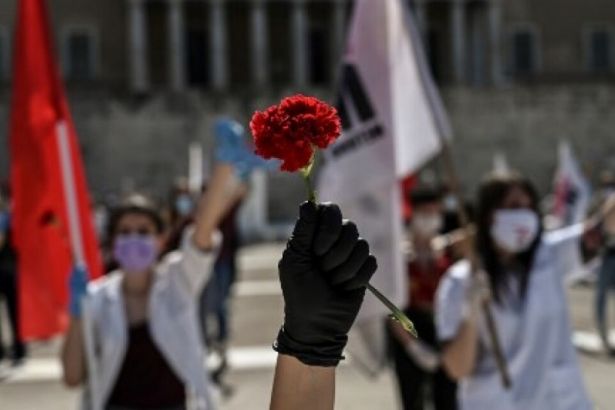 On May 10, 2020, a teleconference of the parties of the European Communist Initiative was held at the initiative of the KKE, under the theme: "The struggle of the communist and workers' parties in the conditions of the pandemic and the new capitalist crisis".

The introductory speech at the teleconference was given by Dimitris Koutsoumbas, General  Secretary of the CC of the KKE.

The teleconference took place a few days after the celebration of Labor Day and May 9 - the 75th anniversary of the Antifascist Victory, which this year were honored by the parties under special circumstances. The parties of the European Communist Initiative honored the countless dead of the workers' struggle and the anti-fascist victory of the peoples, led by the Red Army, the Soviet people, and the Bolshevik Party.

During the teleconference, the communist and workers' parties that participated exchanged information regarding the health systems and labor rights in the European countries, the measures of the bourgeois governments, the EU, and the attack of the capital.

During the discussion, it was proved that the CoVID-19 pandemic revealed the huge problems of the public health systems in capitalist countries. These problems are caused by the long-lasting anti-popular policy of underfunding, under-staffing, and degradation of public health infrastructure, in favor of the commercialization and privatization of health, to support the profitability of the monopolies. The situation in the health sector, which has been formed for the benefit of capitalist profitability, on the one hand leads to the intensification of doctors and nurses' work, and on the other hand is unable to substantially meet the contemporary needs of prevention and healthcare of the people, confirming that capitalism is the real "virus".

In addition, the current situation has highlighted the contradictions between capitalist countries and the monopolies for the patent of the new vaccine, the treatments, and the necessary medical supplies.

The parties of the European Communist Initiative have conveyed their experience from the consequences of the new capitalist crisis that followed the slowdown in the economy that took place in the previous period and is taking on great proportions in the conditions of the pandemic. They  denounced the attack of the capital manifested on all fronts and the anti-labor measures of the bourgeois governments, which at the same time provide huge amounts of money to support monopoly groups.

It was proved that there is a general trend towards rising unemployment, flexible forms of employment, new anti-labor measures, and a suspension of trade union rights. It is becoming clear that once again the working class and other popular strata will pay for the capitalist crisis.

Under these circumstances, the representatives of the communist and workers' parties of the European Communist Initiative (ECI) discussed the positions of the parties and their actions to protect people's health and workers' rights against the impasses of capitalism.

First of all, during the teleconference, the parties expressed their warm thanks to the doctors and nurses, the hospitals and health units' staff who gave the battle and are still fighting against the pandemic, facing great difficulties.

The ECI parties also expressed solidarity with those affected by the CoVID-19 pandemic and wished them a speedy recovery.

Moreover, they saluted Cuba's solidarity action with the most affected countries.

The parties agreed to reinforce the struggle for:

Immediate strengthening of public health systems, recruitment of permanent medical and nursing staff with full rights, the meeting of all needs in Intensive Care Units (ICUs) and infrastructure required for the full operation of public health care and research services.

The communist and workers' parties in Europe noted that they will lead the struggle against the attack of the capital, which in the face of the new crisis proceeds to widespread layoffs and tries to further crush wages, working hours, leaves, and other labor rights. They expressed their solidarity with the class-oriented trade unions that struggle in order for the workers not to pay the consequences of the capitalist crisis.

They spoke out against the imperialist plans of the USA, NATO, and the EU, as well as against sanctions and economic exclusion measures that are criminal and make people's lives difficult.

The parties that attended the teleconference noted that the current situation shows the deep impasses of the capitalist mode of production (crisis, unemployment, the impoverishment of the working class, the commercialization of social needs such as health, imperialist wars, etc.).

Under these circumstances, the slogan "Socialism or barbarity" is more timely than ever.