Two prefabricated wooden veneers including a childcare area, a masjid, and a toilet were placed in the ancient theater site from the Roman period in Antalya 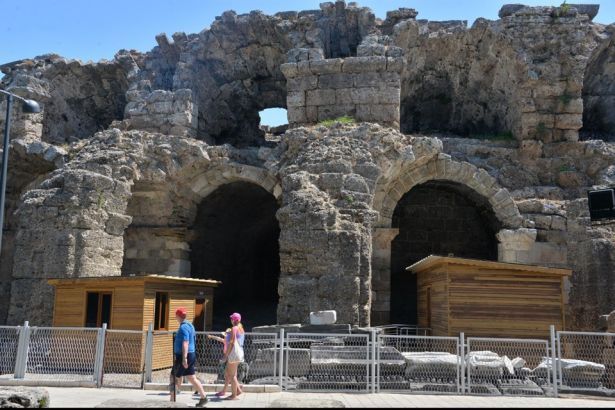 Two prefabricated wooden veneers were placed in a site of an ancient theater, which was thought to belong to the Roman period, in Antalya's Side district.

The wastewater drain pipe of the toilet was extended by about 60 meters over the historical monuments and connected to the sewer line.

According to DHA, the restrooms and prayer rooms were built after a meeting of the Antalya Regional Cultural Heritage Preservation Committee and the project was coordinated by the Antalya Directorate of Museums.

These prefabricated buildings are built next to the ancient theater walls and into historical monuments. The Antique Theater in Side is listed as a first-degree archaeological site.

Pointing out that not even a nail should be driven on these sites, the head of Culture, Art and Tourism Workers' Union's Antalya branch, Seyfi Turan, stated that called for the removal of the buildings.