Defence Minister Akar: We have not recognised the annexation of Crimea nor will we

Turkish Defence Minister Akar stated that Turkey has not recognized the annexation of Crimea and welcomed the development of Enhanced Opportunities Partnership between Ukraine and NATO. 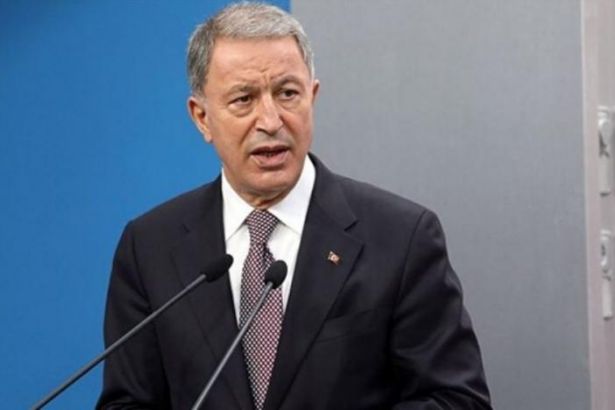 The Defence Minister Akar paid an official visit to the Ukrainian Ministry of Defence in Kiev. Andriy Taran, the Ukrainian Minister of Defence, welcomed Akar with a military ceremony. The military band played the national anthems of both Turkey and Ukraine, and Akar saluted the ceremony squat. Akar and Taran laid a wreath at the war memorial.

Akar and Taran presided the delegations and organised a press conference.

Akar addressed Taran as ‘distinguished friend’, and stated that the meeting was sincere and fruitful. Akar also stated that both sides comprehensively discussed the bilateral relations in the Black Sea. He wished condolences for the loss of Ukrainian citizens during the COVID-19 pandemic and underlined that solidarity between Turkey and Ukraine would continue for the fight against the pandemic.

‘Turkey and Ukraine are working together under the light of strong relations, historical ties, and cultural norms. We have taken important steps together regarding defence and security. Our developing bilateral relations will prosper our respective countries and the region.

Bilateral relations are important to safeguard the rights and interests of our countries, contribute to the prosperity of our peoples. It is in our great benefit to work together. We have defended and will defend the territorial unity of Ukraine and peaceful resolution, as also stated by President Recep Tayyip Erdoğan. We will do whatever is necessary for a peaceful resolution and diplomatic mechanisms.

We have not recognised the annexation of Crimea nor will we. We support the OSCE Observation Mission, which has played an important role regarding the de-escalation of conflict even if it has not resolved it.

We have welcomed the development of Enhanced Opportunities Partnership between Ukraine and NATO. I would like to congratulate my distinguished friend Taran for that. I would like to underline that stability in the Black Sea could only be sustained by the littoral states and hence any unnecessary conflict should be avoided.’

Taran stated his joy for hosting Akar and responded:

‘I would like to thank Turkey, our friend, for supporting our steps and attempts toward the territorial unity and sovereignty of Ukraine.

We are determined to take steps toward the establishment of peace and stability in the Black Sea and the Sea of Azov.