Crisis management of Turkey's capitalists: They do manage "for now" 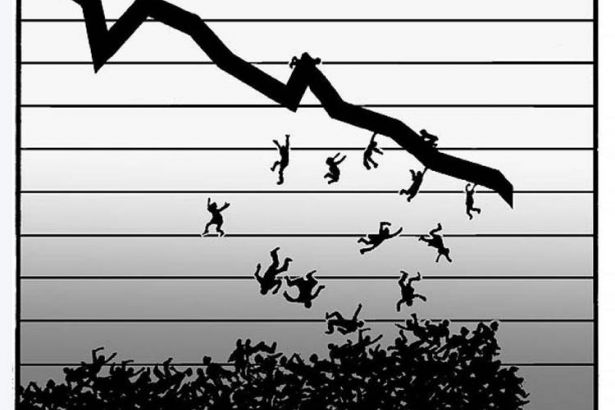 Three statistics announced in the last two weeks show that the capitalist class has successfully managed the severe economic crisis in Turkey.

Yes, it has turned upwards, but the overall decline in annual inflation is expected to continue for the next three months. This is due to the fact that monthly inflation rates had been quite high in the last three months until November last year. In 2018, the rates were 2.30, 6.30 and 2.67 for these months. TurkStat's annual inflation calculation is made based on the same month of the previous year.

Let me correct one thing in order to prevent misunderstanding. Prices do not fall, but the rate of increase in prices decreases. Despite a 10 percent drop in fresh fruit and vegetable prices in July, the annual average inflation of these products is still at 44 percent. In the last twenty-five months, there are only two months in which inflation is negative.

We can say a lot of things. Most of all, the government's manipulation in TURKSTAT and TURKSTAT's manipulation in the figures... Nobody believes these numbers, that's true. But on the other hand, people are getting used to living with these expenses. Of course, the fact that the borrowing channels are still open has a role in this. Interest rates have now dropped, and people's phones are ringing almost every day by bankers who say “we can give loans” or "we can restructure your loans.” Life is expensive but it is possible to live with loans! For now, this is the cycle.

The second statistic is the “2018 Household Consumption Expenditure” statistics announced by TURKSTAT at the end of July. Statistics include the distribution of expenditure items by income groups. The results are stunning:

When we look at the shares in expenditure items in the poorest 20 percent of the population and the richest 20 percent, the biggest difference is in spendings on education. The highest income group has a share of 64% of all education expenditures. This figure is 32 times the share of the lowest income group in education. The poorest segment of the population accounts for only 2 percent of education expenditure. Similarly, the poorest segment has a lower share in terms of the expenditures on transport, various goods and services, entertainment and culture, restaurants and hotels.

This means that the masses who become impoverished by the cost of living are confined to unqualified education, they hardly ever travel, they cannot benefit from different goods and services other than their vital needs, and they cannot allocate money for entertainment and cultural activities.

We also need to mention that “cigarettes, tobacco, and alcoholic beverages" constitutes the third largest share among the expenditure items of the lowest income group compared to other items. Addiction remains the most powerful weapon of the capital class for sustainable poverty.

When the change in the number of workers in different sectors is examined carefully, it is seen that the number in two of the sectors increases regularly. These two sectors are “Health and Social Services” and “Trade, Office work, Education and Fine Arts”. In the last January statistics, the number of employees in almost all branches decreased, while the numbers in these two sectors increased. The increase continued in recent statistics. The increase in the number of employees in the health sector has exceeded 10 percent compared to last year.

However, these are the two sectors where the employers violate the rights of the workers the most during the crisis. We hear almost every day that a private hospital or a private school not paying to the workers. However, the number of workers does not decrease but increase. It is clear that in these sectors, people are working under great pressure, with late or unpaid wages, fear of dismissal and losing compensation payments.

Is there better crisis management for the capitalist class?

They do manage the crisis. It's not just about relieving the capitalists with resource transfers, incentives, and privileges. There is also a social pillar. The disorganization of the working class is important here and there is no doubt this fact facilitates crisis management. People in Turkey is like a frog thrown into the boiler before heating the water. People are slowly getting used to the heat.