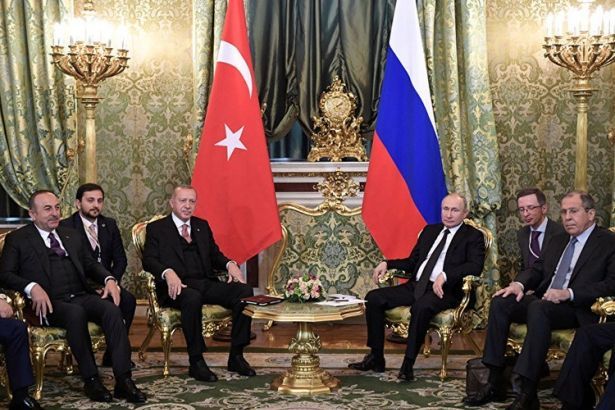 The meeting held in Moscow between Erdoğan and Putin has resulted in the continuation of the agreement concerning S-400 missile systems. Putting aside the uncertainty of the agreement in question, it is important to declare such a determination despite the US' pressure regarding F-35 jets last week. Besides, obviously, Russia has opened to Turkey a new door as an alternative to which the US is bluffing to close.

Turkish president Recep Tayyip Erdoğan and his Russian counterpart Vladimir Putin also discussed the S-400 missile systems on which the US has recently intensified its pressure for Turkey, as well as an array of collaboration topics between two countries. It was, though, according to some comments, already the most actual and crucial agenda of the meeting.

On the S-400 defense system from Russia, President Erdoğan said on Wednesday, April 10, "The S-400 missile defense system was planned to be delivered in July, but it could be earlier. The US is constantly pushing for such a move."

Both leaders' statements essentially have pointed out that the delivery agreement is in progress and the parties are loyal to it. In this manner, it seemed like there was no new development as to the most significant topic of the agenda. However, this is not the whole story, according to Gamze Erbil from soL news.

"No problem, we go on," says AA, "The priority of Putin" says TASS

While Turkey's state-run, pro-government Anadolu Agency (AA) headlined one of its news addressing the issue as "Putin stated that he discussed with Erdoğan regarding the delivery of the S-400 missile systems and the purchase of other arms", TASS, the Russian agency wrote "Putin has defined as priority the implementation of the S-400 deal with Turkey."

According to TASS, in the press conference that took place following the meeting with Erdoğan, Putin cited that Moscow had decided to step forward to deliver the S-400 systems to Ankara. Erdoğan, in return, emphasized that Turkey would not cancel the acquisition plan of the S-400 systems from Russia.

In a nutshell, the parties, although there are some nuances, have declared once more that they did not step back in the face of the US pressure kept on the issue.

No step back on the agreement, how about a step forward?

There is also an ambiguity with regard to whether progress was made on the deal. Turkey requests technological collaboration and joint investment concerning the S-400 systems, and the parties have not come to a conclusion yet except revealing some 'wishes'. Moreover, without making some strategic preferences, it shall not be possible to have come to an agreement. The agreement that is frequently being pointed, however, is the one which Erdoğan announced back in September 2017 and pledges that Turkey would purchase the S-400 systems by a down payment.

As is known, the very first news and articles citing that Turkey had started negotiations, date back to November 2016. No one has a comprehensive and precise insight about this agreement which came up following year-round discussions between the parties. There is one clear announcement, though, made by Hulusi Akar, Turkey's Minister of Defence, saying that the S-400 systems would be deployed and launched by 2019 October.

The emphasis on 'completion of the contract' that Putin raised in the inaugural speech of the meeting was, indeed, a 'reminder' to Turkey. Turkey shall end up having a strategic military collaboration with Russia, rather having an 'independent foreign policy' when the shipment begins. That is, it will become dependent on Russia, instead of the US.

Despite being seen as a bluff by some, essentially, the US's strategic pressure on Turkey regarding F-35 jets reminds Turkey that the way it pursues now is pointing a different preference.

The parties are recalling important stuff to each other however, the AKP maintains the diplomacy with a style it has long been carrying out to save the day.

A promising move for Putin

Yet another substantial point in the meeting was Putin's statement that they had discussed the purchase of other arms and had some promising projects on the agenda providing Turkey with modern Russian military equipment.

It is known that Russia, in the past when Turkey got in trouble with the US's pressure, has offered Sukhoi fighter jets for Turkey as an alternative to US's F-35 jets. It was not disclosed what sort of 'other' arms to be purchased in the last meeting that took place at a time that the F-35 crisis with the US is soaring, nevertheless, one can consider that Putin keeps reminding proper things to Turkey. And again, this points out to an entirely new strategic collaboration.

Here are some phrases from Putin's discourse at the meeting of the Turkey-Russia High-Level Cooperation Council (UDIK):

"I would like to underline that the collaboration between two countries now has become a strategic tendency in the energy field. Russia is the biggest natural gas supplier for Turkey. Last year, we exported 24 million m3 which was almost half the amount of Turkey's need."

"Our countries face serious tasks when it comes to strengthening the joint effort and collaboration on the military-technology ground.

First and the top of all, we are discussing to complete the contract to supply Turkey the S-400 anti-aircraft weapon system.

We have also some promising projects on the agenda providing Turkey with modern Russian military equipment."