The construction workers of the Başakşehir City Hospital in İstanbul went on a strike today, protesting the food 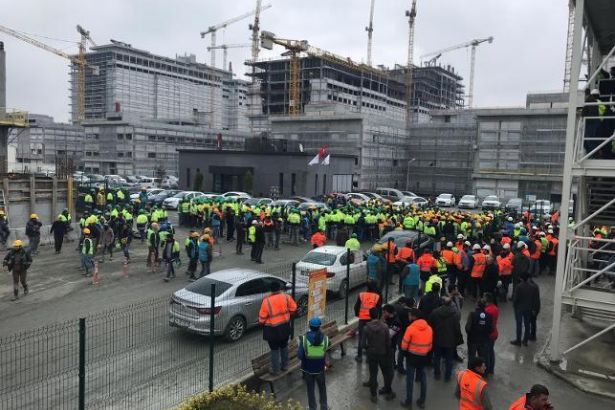 Rönesans Holding's partner is a Japanese company Sojitz in the city hospital project, which is expected to be one of the largest hospitals in the world when completed. President Recep Tayyip Erdoğan was also present at the signing ceremony of the project's financial contract and gave a speech.

İstanbul's Başakşehir City Hospital will have a capacity of 2,700 beds and is expected to serve to 23 thousand 600 patients a day. Thousands of workers work on the construction site, which has a construction area of over 1 million square meters.

In July 2018, in another construction project of city hospital in Bursa which was also constructed by Rönesans Holding, 1500 workers gathered and stopped working to stage a protest against the contracting firm forcing them to work under poor and harsh circumstances, with slogans calling on the administration to resign.

Huge city hospitals around the country stand as a dreamy project of President Recep Tayyip Erdoğan’s government with a further commercialized health care system in Turkey as construction workers are regarded as a cheap labor force in poor working conditions.

On the other hand, violating the agreements with regards to the ‘public-private partnership projects’, contractor firms often impose the burden of exchange rate increases on public entities. As local and foreign contractors use financial credits with treasury guarantees, the public sector disproportionally assumes the financial loads in favor of capitalist establishments. For instance, if minimum wage increases exceed inflation rates, the city hospital contractors benefit from extra payments in entire services, revealing a true plundering mechanism in defiance of the public sector.