As many soldiers and civilians lost their lives during the conflicts between Armenia and Azerbaijan in the disputed Nagorno-Karabakh region re-erupted on Sep. 27, regional actors and international community urged both countries to end the clashes. 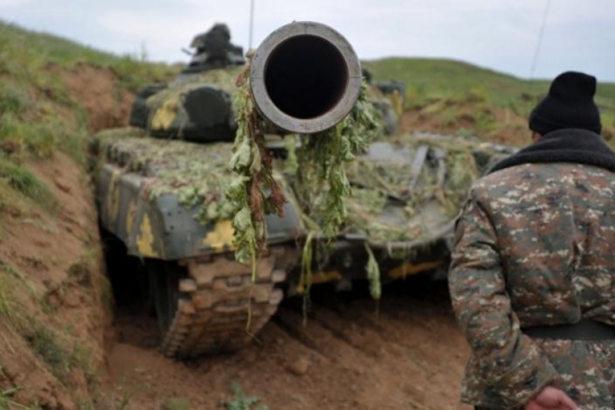 Azerbaijan and Armenia have declared martial law and a total military mobilization following the tensions rose over the disputed region of Nagorno-Karabakh on Sunday morning, blaming each other for the escalation that caused reports of casualties.

The Ministry of Defense of Azerbaijan claimed that the Armenian army opened fire on the positions of the Azerbaijani army and civilian settlements along the frontline at 06:00 a.m. on Sunday, and Azeri forces launched a counterattack upon the fire commenced by the Armenian forces.

On the other hand, the Ministry of Defense of Armenia announced that it was the Azerbaijani army that initiated the attack on the frontline at 04:00 a.m. and that they have been facing a pre-planned provocation.

As heavy clashes between Armenia and Azerbaijan have continued since Sep. 27, official sources of both countries released images of destroyed and damaged armoured vehicles and military convoys.

Azerbaijani sources announced that six settlements located on the Nagorno-Karabakh border have been captured. While Armenia denied the Azerbaijani allegations, it officially announced that 15 soldiers from the Armenian army died and more than 100 soldiers were injured during the clashes so far.

At least 200 people had been killed in a flare-up of the conflict between Armenia and Azerbaijan in April 2016, and at least 16 were reported killed in clashes in July 2020.

INT’L COMMUNITY AND REGIONAL POWERS CALL FOR ENDING THE CONFLICT

Following the recent rising tensions between Armenia and Azerbaijan over the Nagorno-Karabakh region, international organizations and regional powers, particularly Russia, Iran, NATO and the European Union, urged the belligerents to end the conflicts and adhere diplomatic ways for permanent peace in the region.

‘‘NATO is deeply concerned about reports of large scale military hostilities along the line of contact in the Nagorno-Karabakh conflict zone. The sides should immediately cease hostilities, which have already caused civilian casualties. There is no military solution to this conflict. The parties should resume negotiations towards a peaceful resolution. NATO supports the efforts of the OSCE Minsk Group,’’ NATO said in its statement released on the recent conflicts in the disputed Nagorno-Karabakh region between Yerevan and Baku.

Issuing a statement in connection with the aggravation of the situation in the region, Russian Foreign Ministry noted, ‘‘In accordance with the available information, the situation in the zone of the Nagorno-Karabakh conflict has sharply deteriorated. There is intensive shelling along the contact line from both sides. There is information about the casualties. We call on the sides to immediately cease the fire and start negotiations to stabilize the situation.’’

Kremlin Spokesman Dmitry Peskov told reporters on Monday that ‘‘We continue watching the situation very carefully. We believe that combat actions must be immediately stopped and the process of settling the conflict as well as the consequences of the recent deterioration should switch to the political and diplomatic sphere.’’

Stressing that it was vital to stop combat actions rather than to ‘‘sort out who is right and who is wrong,’’ the Kremlin Spokesman Peskov said, ‘‘Russia has always held an equally weighted position and this stance allows Russia to use its influence and its traditionally friendly relations with both sides in order to iron out this conflict.’’

Stating that Iran is closely monitoring the alarming violence in Nagorno-Karabakh, Iranian Foreign Minister Javad Zarif underlined on his Twitter account, ‘‘We call for an immediate end to hostilities and urge dialogue to resolve differences.  Our neighbors are our priority and we are ready to provide good offices to enable talks. Our region needs peace now.’’

Condemning the use of force and the loss of life and the toll on the civilian population, Guterres called on both governments to immediately stop clashes, de-escalate tensions and return to ‘‘meaningful’’ negotiations without delay, his spokesman Stephane Dujarric said in a statement.

Charles Michel, the President of European Council, also called for ‘‘an immediate return to negotiations, without preconditions,’’ saying that ‘‘Military action must stop, as a matter of urgency, to prevent a further escalation.’’

Josep Borrell, High Representative of the EU for Foreign Affairs and Security Policy, underlined the urgency of relaunching negotiations under the auspices of the Minsk Group in which France, Russia, and the US have mediated peace efforts, but the last big attempt for a peace deal on the Nagorno-Karabakh conflict was deadlocked in 2010, with serious consequences.

‘‘EU calls for an immediate cessation of hostilities, de-escalation and for strict observance of the ceasefire,’’ Borrell said.

TURKEY: ‘‘WE STAND WITH AZERBAIJAN’’

While the international community calls on Baku and Yerevan to ease the tensions and stop fighting that led to civilian deaths, Turkey reiterated its support to Azerbaijan in conflict with Armenia.

Saying that Azerbaijan will surely use its right of self-defence to protect its people and its territorial integrity, the Spokesperson of the Ministry of Foreign Affairs, Hami Aksoy, noted in a statement, ‘‘In this vein, Turkey fully supports Azerbaijan with unwavering solidarity. We will stand by Azerbaijan whichever way it prefers.’’

‘‘We strongly condemn the Armenian attacks which constitute a clear violation of international law and caused civilian casualties. With these attacks, Armenia once again displayed that it is the biggest obstacle to peace and stability in the region,’’ he also added.

Turkish President Recep Tayyip Erdoğan also made a statement on his Twitter account about the recent conflicts between Armenia and Azerbaijan in the Nagorno-Karabakh region, saying, ‘‘Adding a new one to its attacks against Azerbaijan, Armenia once again showed that it is the biggest threat to peace and tranquillity in the region. The Turkish nation stands by its Azerbaijani brothers and sisters with its entire means as it has always been.’’

Meanwhile, on September 14, Armenia’s Foreign Minister had claimed in his official visit to Cairo that Turkey had sent jihadi mercenaries from northern Syria to Azerbaijan and that they were taking part in the fighting against Armenian forces. Azerbaijani and Turkish authorities denied the accusations on Monday.

ARMENIAN PM WARNED AGAINST TURKISH INTERVENTION IN CONFLICT WITH AZERBAIJAN

Armenian Prime Minister Nikol Pashinyan called on the international community to prevent Ankara from meddling in Armenia’s conflict with Azerbaijan over the disputed Nagorno-Karabakh region.

Pashinyan said that Turkey’s offensive policies on Yerevan might lead to devastating consequences for the South Caucasus (Transcaucasia) and neighbouring countries.

Speaking at an emergency meeting of the parliament, Armenian Prime Minister Nikol Pashinyan also stated that Yerevan is considering the possibility of recognizing the independence of the Republic of Artsakh (or the Nagorno-Karabakh Republic), a breakaway state in the South Caucasus that is internationally recognized as a part of Azerbaijan.

The Republic of Artsakh, or the Nagorno-Karabakh Republic, controls most of the territory of the former Nagorno-Karabakh Autonomous Oblast along with some surrounding territory, having borders with Armenia to the west and Iran to the south.

While the Nagorno-Karabakh region is officially recognized as a part of Azerbaijan by the international community, Armenia has the military control of the self-proclaimed republic.

Naming itself as the Republic of Artsakh, the Nagorno-Karabakh Republic is not recognized by any member of the United Nations, including Armenia, but receives unofficial support from Yerevan and has unofficial diplomatic missions in Russia, the United States, France, Australia, Lebanon, Germany, and Armenia. 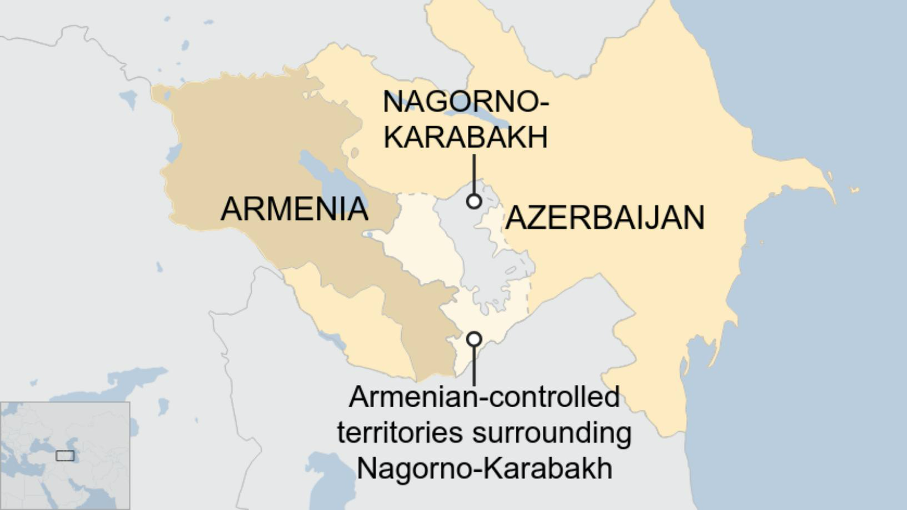 A BRIEF HISTORY OF NAGORNO-KARABAKH CONFLICT

The mainly Armenian-populated region of Nagorno-Karabakh was claimed by both the Azerbaijan Democratic Republic and the First Republic of Armenia, the two independent countries founded in 1918 after the fall of the Russian Empire.

Following the independence, a short-lived war between Armenia and Azerbaijan over the region erupted in 1920. Yet, the dispute between the two countries was largely resolved after the Soviet Union established control over the area and both Armenia and Azerbaijan joined the ranks of Soviet Union as the Armenian Soviet Socialist Republic and the Azerbaijan Soviet Socialist Republic (Azerbaijan SSR), while the Soviet authorities decided to create the Nagorno-Karabakh Autonomous Oblast (NKAO) within the Azerbaijan SSR in 1923.

However, the Nagorno-Karabakh re-emerged as a source of conflict between Armenia and Azerbaijan during the fall of the Soviet Union, particularly as of 1988. The majority of Armenians in Karabakh accused the Azerbaijani government of forced ‘‘Azerification’’ and wanted to be transferred from Soviet Azerbaijan to Soviet Armenia.

When Armenian-backed Nagorno-Karabakh declared itself as an independent republic in 1991 through a referendum held in the NKAO, a full-scale war broke out with Azerbaijan, leading to ethnic conflict between 1991-1994, named as Nagorno-Karabakh War, which ended with a ceasefire along the current borders.

Although the ceasefire has remained intact so far, both Armenia and Azerbaijan have been violated it countless times. Before the recent conflict erupted, the heaviest clashes in the region were in 2016 when Azerbaijan threatened to take over the Nagorno-Karabakh region, claiming the lives of 100 soldiers from each side.