SoL news has interviewed the Chairman of the Executive Secretariat of Greece's PAME, George Perros, on the recent refugee issue escalated by Turkey's AKP government that makes the humanitarian crisis one of the means for bargaining with the EU. 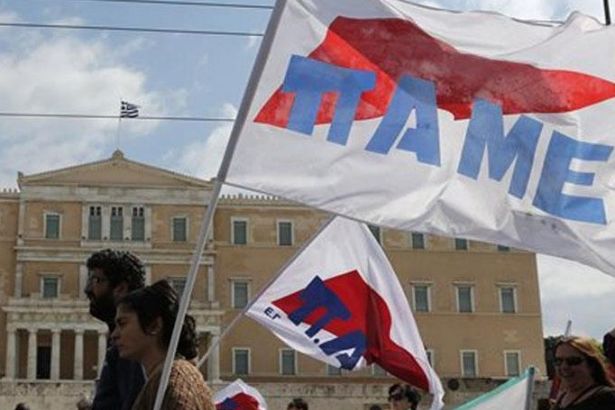 George Perros, Chairman of the Executive Secretariat of PAME has answered the questions of soL news portal on the recent refugee issue that has been raised by the intervention of Turkish Armed Forces in Syria and the opening of borders for the passage of refugees by the AKP government as a means of bargaining with the EU.

Perros refers to the escalating repressions and fostered nationalism in Greece and the demands of PAME and Greek working class. Perros considers the fact that the EU, NATO and the Greek government support the imperialist intervention of Turkey's bourgeoisie in Syria as worrisome and mentions new solidarity initiatives with the working people of Turkey.

A prominent leader of the Greek working class and a member of the Central Committee of the Communist Party of Greece, Giorgos Perros joined the 2018 Conference of TKP, whose theme was “To the Workers”.

In Greece, the current ND government has attempted to forward further the EU-Turkey Joint Statement on the Refugees, which was signed by the previous government of SYRIZA. The new step they attempted was to build new, permanent "concentration camps" of refugee-migrants that would expand and permanently transform Greece into a "warehouse" of people without allowing them to go to the countries of their final destination. This way they divide families, make them suffer and survive in miserable conditions, but at the same time, they burden the people on the islands as there is no infrastructure.

The Greek Governments try to hide their responsibilities for supporting the EU-NATO imperialist policies and interventions that cause the uprooting of millions, while with their measures, the suppression and entrapment of refugees they foster nationalism, racism, and xenophobia.

·        Abolition of the Dublin Regulation and the EU-Turkey Joint Statement

·        To close all the refugee concentration camps (hot spots) in the Aegean islands and not to create new ones, neither closed nor open.

·        Immediate release of refugees from the islands and fast-track procedures to be implemented for them to go to their countries of destination.

The Greek government is using tough means to repress refugees and asylum seekers at the border and now also the EU's FRONTEX forces will be involved. What are your expectations for the future days, what will all these measures lead to?

Following the Dublin Regulation, the Greek Government has undertaken to turn Greece into a big refugee prison of the EU. At the same time, the presence of FRONTEX at the Greek border means that foreign troops will also be present in Greek territory. It is a dangerous development that can lead to greater dangers, while in practice it will not play a role in resolving the refugee issue, as has already been demonstrated by the previous presence of NATO-FRONTEX in the Aegean but on the contrary, the situation will become more complex.

These measures will lead to a larger problem in Greece. Legalization of reactionary positions and actions, far-right forces and rationales, and substantially more active support for imperialist interventions in the region, of the EU and NATO, but also of the Turkish bourgeoisie. At the same time, as we saw in the previous days on the islands, while the situation will deteriorate also for the locals, the repression will escalate.

Most worrying is that the EU, NATO and the Greek government support the imperialist intervention of Turkey's bourgeoisie in Syria. The Greek prime minister at a recent Summit of NATO Ambassadors gave the green light to Erdogan's government for invading Turkey in return for the implementation of the EU-Turkey Joint Statement. That is, they accept the aggressive stance of the Turkish bourgeoisie to the detriment of the sovereign rights of other countries and the infringement of border-defining agreements such as the Treaty of Lausanne. The consequences of all this will again be paid by the people of Syria, Turkey, and Greece.

Since its foundation, PAME has been struggling against the divisive attacks targeting the working class. What is the general sentiment among working people, especially those in the islands and in the border regions towards refugees, facing the recent developments?

PAME, the class unions, but also thousands of workers, and people all over Greece, despite the ten-year-long crisis and the major problems they face with anti-people policies, they have been and will continue to be firmly on the side of refugees and immigrants. Greek governments and other bourgeois political forces, with the help of the media, are attempting to conceal their own responsibility for both the poverty of the Greek people in recent years and their support for NATO-EU and imperialist interventions by targeting the victims of their policies, the refugees and migrants. Mostly with nationalist, xenophobic arguments about "invasion", the government is trying to create a climate of tolerance for its inhumane and dangerous policy.

The class unions in Greece respond with mass action and mobilization in every workplace. We are informing workers, we give a response and mobilize against the government’s policy that targets refugees but also prepares a law against the right to workers’-people’s movement, against the demonstrations and the struggles of workers, Greeks, and migrants. The image of the Riot Police forces abandoning and retreating from the islands, under the decisive peoples’ struggle and generalized popular outcry, the obstacles the government encounters in implementing its plans, are a first but important success of the uprising people in Lesvos and Chios. The struggle now needs to escalate against the government line that, despite its being cornered and forced in maneuvers, remains consistent in the line of entrapment, and the construction of new closed structures on the islands.

What kind of solidarity actions have you organized for refugees and how were they received given the nationalistic and repressive discourse of the government? Did you encounter any repression during those actions, of what kind?

Over the last years, PAME and class unions have taken on a multitude of initiatives and solidarity actions. We have developed a huge network of solidarity, of material assistance to refugees. Despite the financial hardships of the Greek worker almost every week, unions handed over clothes, medicines, food, books, and toys to refugee camps. Trade unions continued to visit camps, as well as organize rallies, protests, demonstrations at ministries and agencies to improve the conditions, for the immediate problems, from housing to health care and processing applications of the refugees. But also with cultural events, joint actions, celebrations, the unions have always tried to express their solidarity.

For this action, PAME has always been on the target of the governments, bosses, and fascists. In addition to the murderous attacks of the Golden Dawn Nazis, we have had the recent example of repression against popular mobilization in the islands. The arrests of trade unionists, militants, students and many more, which prove that the anti-workers policy of the bourgeois governments is attacking on locals as well as on migrants.

Finally, do you have a message to Turkey's working class amidst the attempts and provocations to raise hostility between two peoples?

At the same time that the bourgeoisie of Greece and Turkey, with their governments and media, cultivate nationalism and hostility among the peoples, at the same time they held a big Meeting of Businessmen in Thessaloniki, Greece, to develop their economic relations. That alone proves how hypocritical they are when they talk about "national unity".

Businesses from both countries collaborate against the workers, the cut our wages and lay us off and lead us to poverty. At the same time, the governments of Greece and Turkey are jointly involved in NATO and imperialist interventions, they are privatizing social services, they attack and arrest workers who are demanding their rights.

The Greek working class was born and raised with the same difficulties and hopes as the Turkish workers. The worker of Greece has nothing to divide with the worker of Turkey. On the contrary, we have a common opponent, capitalism that destroys us and robs us of our life and our future, which gives birth to imperialist wars, poverty, and refugees, for the profits of the bosses.

Because we are united by our common struggle for bread, for work, for peace and for the prosperity of the people, for our children to live in a better world, without poverty, without wars, and without refugees. We are united in the fight for a world without exploitation.

PAME, the Greek class unions, will soon launch new initiatives of friendship and solidarity with the workers and the people of Turkey. Against nationalism and the dangerous plans of the imperialists.