Communist Youth of Turkey: We don’t have any lesson to learn from reactionaries!

The Communist Youth of Turkey (TKG) protested a reactionary professor at Yıldız Technical University, Bedri Gencer, who claimed that natural disasters are linked to the prohibition of child marriages in Turkish law after the earthquake that hit Turkey's Elazig and killed 41 people. 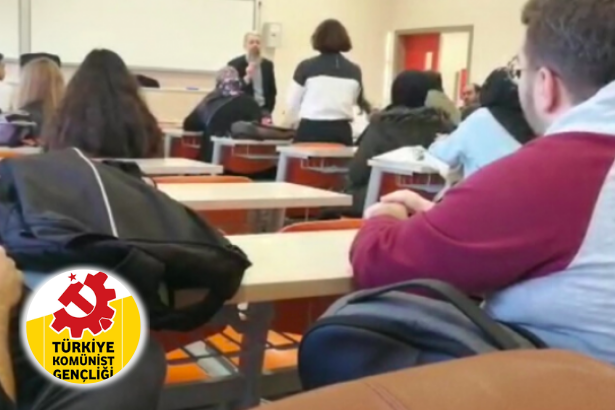 Bedri Gencer, a professor at the faculty of Science and Letters of Yıldız Technical University, wrote on his personal social media account on the following day of the Elazığ earthquake, linking disasters to the legally banned child marriages in Turkey.

Gencer claimed that banning marriages at child ages and describing it as sexual assault by law despite the order of the Quran would lead to disasters. Gencer’s comments sparked public outrage. Although the university administration announced that an investigation over the post of Gencer was initiated, classes of the reactionary professor have been continuing as usual since last week.

On Monday morning, the Communist Youth of Turkey organized a protest against Gencer during his class. TKG members declared that they will expel Gencer from the university, saying "You have no legitimacy to be in the university nor to teach.” After the declaration, they left the class with the other students.

TKG also made a statement about the protest that became prominent on the news among Turkey. The statement is as follows:

“Today we protested the class of so-called professor named Bedri Gencer. Many of our friends submitted a petition to drop his class.

As reactionism threatens young people and women living in our country every day, we do not accept the invasion of the university positions by such people.

Today we left this person’s class and now we will move forward to throw reactionism out of our country. As the students of Yıldız Technical University, we will reveal the crimes committed by this reactionary person. We will do whatever it is necessary to send him away from our school and to put him on trial and forbid him from public service again!

We call on all our friends to come and walk together in this struggle.