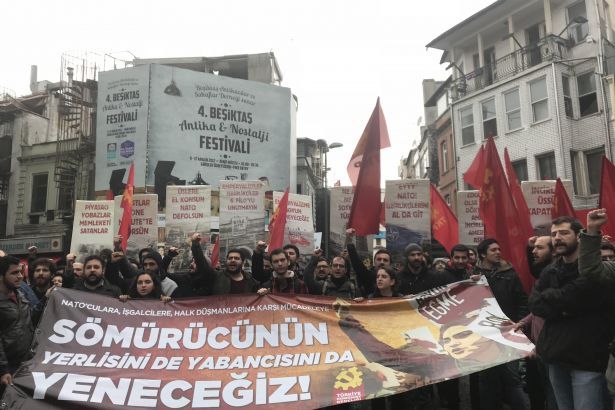 Communist Youth of Turkey (TKG), which has been carrying out an anti-imperialist campaign around Turkey for a while, staged a protest in Beşiktaş district of İstanbul on March 4. Their protest against the "NATO, the US and their allies in Turkey" drew heavy attention from the people.

TKG said that Turkey has been NATO member for 66 years, which has had grave consequences upon the lives of the people of Turkey in the statement they read during the protest.

"As in many European countries, the capitalist resorted to the NATO, or in other words the patronage of the US as the greatest power of the imperialist world, against the threat of communism and rising working class movement", the statement said. Adding that Turkey was no exception to this, the statement underlined that "all sovereign rights have been violated, numerous massacres, assassinations and coups have been organised in Turkey so that Turkey's ties with the NATO remained tight by means of counter-guerrilla organisations."

The statement noted that there cannot be any explanation about the inglorious bilateral agreements between the NATO and Turkey, adding that these agreements should be undone and the NATO base in İncirlik should be held back immediately.

"Unfortunately, our country has taken part in the war as part of imperialist ventures. It is death that falls to the share of the youth while some others make money and secure their positions. However, the youth needs to see this: This is not our war; it is the war of energy conglomerates, holdings that compete over artillery tenders, politicians who want to secure their positions", said the statement. It added that as Turkey ventures on a war in Syria, the economy gets worse in Turkey and poverty increases.

Reminding the patriotic protest of the revolutionary youth of the 1968 against the arrival of the US 6th fleet in İstanbul, Turkey, the Communist Youth of Turkey said they are going to hold back NATO and the US bases in Turkey and will send foreign soldiers to their homes.

At the end of the protest, TKG members set the US and NATO banners on fire, chanting the slogan "Imperialists, and their allies: remember the 6th fleet!"