The NATO for 66 years, the Communist Youth of Turkey called people for a true fight against imperialism and its elements 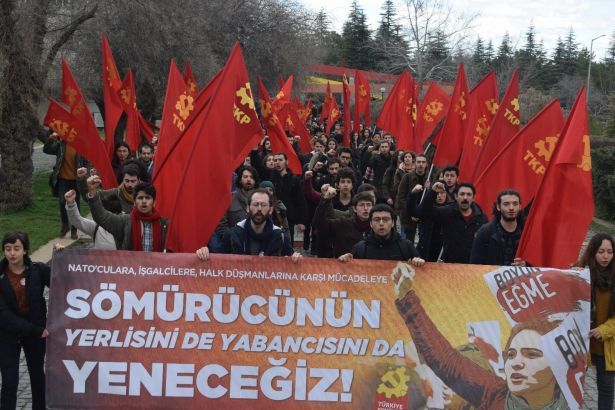 The Communist Youth of Turkey (TKG), the youth organisation of the Communist Party of Turkey (TKP), rallied against the NATO on March 9 in the Middle-East Technical University (METU) campus in Ankara, Turkey, as another step in their ongoing campaign against imperialism. After marching in the campus for a while, the TKG released a statement.

Reminding that Turkey has been a member of the imperialist terrorist organisation, the NATO, for 66 years, and that the people of Turkey have seriously suffered as a result of this, the TKG stated that the NATO has not only been a military force preventing Turkey from having independent armed forces, but also an element of suppression from the aspects of economy and politics.

The TKG also explained that, by means of the NATO, Turkey has been kept in the orbit of the US, numerous massacres and political assassinations were organised, all of Turkey’s sovereignty rights have been violated, and military coups were put into effect.

The TKG pointed out the hypocrisy of the ruling politicians, as well. Saying that those who rush to the White House in order to receive permission as soon as they are elected now talk about an anti-imperialist struggle, the TKG remarked that they are all the wheels of the same order of exploitation.

The TKG also reminded that this is the 50th anniversary of the events when the progressive youth of Turkey fought and forced to retreat the 6th Fleet of the US Navy. “The right-wing conservatives of the time, on the other hand,” the TKG maintained, “grovelled to the 6th fleet, and assaulted those who fought the US Marines.”

In the statement, the TKG also noted: “The pro-NATO bigots and the pro-EU traders of the past attempt to unashamedly assume anti-imperialism today. On the one hand, they bargain with imperialists, they host them as ‘allies’ in our country, and on the other, they never object to the plans of the imperialists on our country, they never touch the imperialist institutions in Turkey. Moreover, they call it the ‘2nd War of Independence’, trying to gather support from the people. They are able to be this hypocritical, because they haven’t felt threatened by the true anti-imperialists, the genuine public-minded people for a long time.”

Finally, the TKG explained that Turkey could be a truly independent country only through socialism, and called the youth and all people of Turkey to start a genuine fight against imperialism and its collaborators.

The TKG’s campaign against imperialism and the NATO has been continuing without any pauses, despite all sorts of attempts of prevention. In the past few weeks, the TKG had made statements in another university in Ankara and in various other cities. In Ankara University, for instance, the university management attempted to ban the communists from distributing leaflets and releasing statements. In the city of Tekirdağ, on the other hand, a fascist mob attacked the TKG members who were making a statement against the NATO.

Not only do the TKG organise rallies, but also a series of meetings titled the “Conversations on Motherland”, where people meet to talk about and look for answers and solutions to the issues regarding Turkey.