University students announced that thousands of signatures have been collected for the campaign, “Our demands for our right to education”. 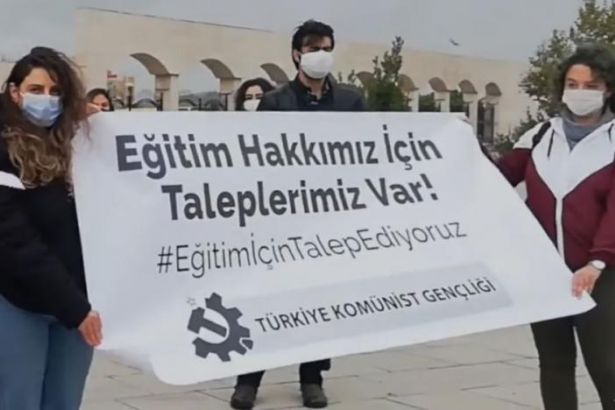 The Communist Youth of Turkey (TKG) organized a campaign titled “Our demands for our right to education.” Announcing that thousands of signatures have been collected in the campaign, TKG also listed the difficulties in education.

The statement made by TKG is as follows:

Following the first COVID-19 case in Turkey, face-to-face education was suspended in the middle of March.

Education in highschools, which has been continuing online for about 9 months, continued with an online distance learning program via state-run TRT-EBA TV. Many universities have tried to continue their undergraduate programs with internet facilities by creating their own online platforms. However, the problems experienced by students at both lower educational stages and at universities were frequently reflected in the media.

According to the data shared upon a parliamentary question, only 8 million 600 thousand students out of 16.5 million are able to access the EBA system twice a week on average.

It has been stated many times that, in universities, especially students who returned to their homes, have experienced a similar problem during the course follow-up, and that their lack of technical equipment at school has caused a serious inequality. Students from 41 different universities who shared their views with the soL News before highlighted the same difficulties.

The campaign titled “Our Demands for Our Right to Education,” that was launched last month based on these problems lists the priorities of the students from the provision of devices such as tablets, laptops and internet access used in online education for all students to increasing the amount of student loans by converting them into scholarships.

The signature campaign reached hundreds of signees from dozens of high schools and universities across the country in one month.

The campaign continued with a joint press release in front of 5 universities in recent weeks. Following this, TKG released another statement to academics with the title “Our right to education is usurped, do not be a part of this crime, give shoulder our demands,” and stated that many intellectuals and academics did not remain silent, and expressed their support, signing the statement.

The signature campaign is still ongoing. The Board Member of TKG Mert Doğan made some statements on the recent situation and the steps they will take in the future following the popularity that the campaign has reached. Saying that the coronavirus pandemic has plunged the already bankrupt education system into another bankruptcy, Doğan stated that this situation is not unique to Turkey, and the online education has exposed the class character of the right to education all over the world.

Doğan added that “Despite this, the government is proud of collapsing sites, expressing the process as a success. The government is committing a crime with this ongoing policy. In this case, organizing the real demands of the students was urgent and necessary. The signature campaign we launched as TKG started out with the aim of organizing around students’ demands. Our efforts will continue to reach more students at an accelerated pace to raise our demands for equal education.”