Communist Youth of Turkey made a statement in response to President Erdoğan's anti-communist words, saying right-wing politicians serve for international imperialist monopolies while communists struggle for independence and workers 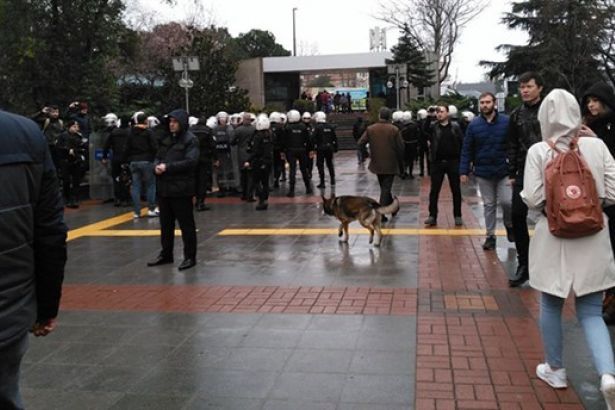 Police stormed a students' dormitory and a house at Bogazici University afterTurkish President Erdoğan accused them of behaving like "terrorists".
  

Erdoğan announced an investigation and said on Saturday, "We won't give these terrorist youth the right to study at these universities," leading to the detention of many students from Turkey’s Boğaziçi University.

"It is not something new that right-wing politicians, nothing but servants of big capital, uses the word ‘communist’ as a swear word; however, it is necessary to respond to the man who occupies the office of Presidency and identifies communism with treason," said the Communist Youth, affiliated with the Communist Party of Turkey (TKP).

‘COMMUNISTS FOUGHT FOR THE TURKISH WAR OF INDEPENDENCE’

The Communist Youth underlined that communists are the true patriots in Turkey and around the world as history shows, adding that the TKP had firstly organized 'Red Units' to support the War of Independence just after it was founded in 1920.

"The communists fought the invaders at the front throughout the War of Independence, and organized a May Day rally with the slogan of independence despite repressions in İstanbul under the British occupation," the statement noted.

The Communist Youth also reminded the role of the communists who had spearheaded the anti-imperialist protests against the U.S. 6th Fleet in the late 1960s in Turkey. The statement noted that while university youth had struggled against the U.S. imperialism, the reactionary forces, the predecessors of the existing government, had supported the U.S. Navy, warning those who dare to call communists traitors should face their own history which is full of treason.

Reminding that reactionary and fascist groups are organizing attacks against the leftist university youth in an attempt to use Turkey’s war in Syria, the Communist Youth said that fascists recently attacked the students with sharp objects at İstanbul University for distributing anti-NATO leaflets. "It is not surprising that President Erdoğan, who phoned the Secretary General of NATO for celebrating his birthday, embraces such gangs regarding them as 'local and national'," the communists noted.

The Communist Youth emphasized that criticising the Afrin operation cannot be identified with "terrorism", adding that the government itself aims at terrorizing the society as it unlawfully labels citizens as "terrorists".

THE GOVERNMENT IN THE SERVICE OF IMPERIALIST MONOPOLIES

Disclosing the government’s demagogic discourse of "having local and national values", the Communist Youth reminded that the government remained silent when imperialist German and French auto industrialists implemented lockouts against worker strikes.

"It is apparent that the government always bans strikes by means of the state of emergency, usurping the workers’ rights and turning the country into a paradise of cheap labour for international monopolies," the statement pointed out, adding that the sugar factories have been privatized for the advantage of the U.S. food monopoly Cargill.

Stating that communists are the most decisive militant force against local and foreign exploiters and their political representatives, the Communist Youth said that anti-communism only paves the way for exploiters and collaborators.

"Anti-communism functions as an ideological guise for blatantly suppressing the struggle of working class," the statement concluded, which is why Erdoğan targeted the communist students.