Communist Party of Turkey in solidarity with resisting workers in İzmir 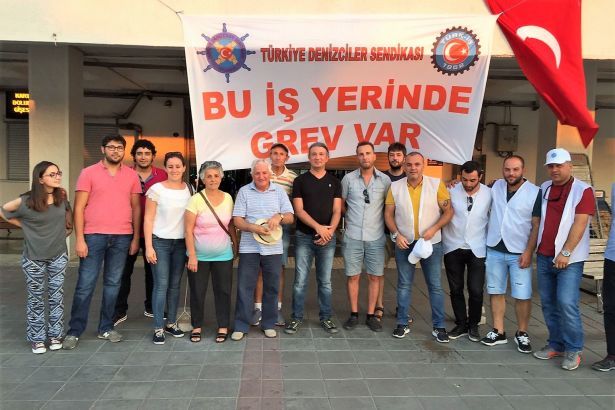 The Communist Party of Turkey (TKP) visited the striker marine workers on July 20 in the western city of İzmir, the third largest city of the country. Working for ‘İzdeniş AŞ’, a company of İzmir Metropolitan Municipality, the workers have been on strike for the last 9 days.

The Seafarers’ Union of Turkey decided to go on strike with 250 workers after the negotiations of collective agreements continuing with İzdeniz company in İzmir since January remained inconclusive. Upon the decision of strike, the workers stopped the maritime transportation in the city.

‘WE INTEND TO CLAIM OUR RIGHTS’

During the solidarity visit of TKP, the resisting workers said that they did not want the citizens to suffer, but intended to reclaim their social and economic rights, which they got through collective agreements with the public companies within the body of İzmir Metropolitan Municipality.

The workers told the TKP members that the citizens welcomed them when they talked with the passengers about their decision of strike, adding that many people supported their resistance in the city of İzmir. The TKP members from İzmir and the marine workers on strike exchanged wishes of solidarity during the visit.

Meanwhile, the workers from İstanbul’s municipal maritime transportation company also decided to go on strike after the collective labour agreement failed between the parties.