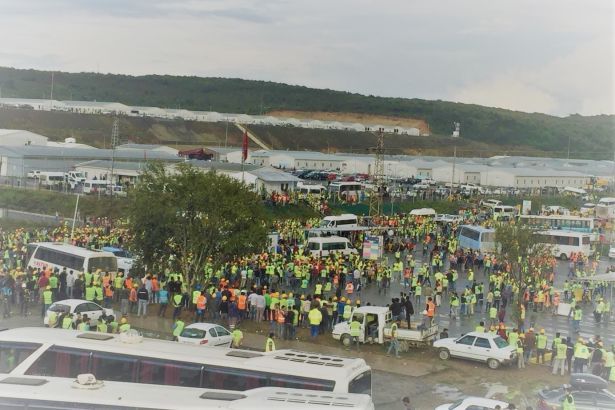 The Communist Party of Turkey (TKP) made a statement on September 15 regarding the recent strike of workers at the construction site of İstanbul's new airport due to inhumane living and working conditions and work-related deaths. "The workers, who say 'We are not slaves', shall win. The exploiters shall lose. This social order shall change," the TKP saluted the striking construction workers.

The recent strike was launched on September 14 after a shuttle vehicle crash that had killed two workers and injured many others the night before. As the crash is reported to have taken place due to heavy rain, the workers say that the vehicles had to overdrive, and they had to wait in long queues under rain because of the insufficient number of vehicles.

"It is of great carelessness to ignore tens of thousands of workers who are employed under slavery conditions, and hundreds of lives who have been lost due to the lack of planning, and arbitrariness and stolidity," the TKP said.

"The third airport construction is one of the most precise indications of how our country has been turned into a hell of labour, yet it does not remain the single example," the TKP said, adding that all the country witnesses similar problems in the field of labour.

Drawing an analogy between the enslaved workers, who had constructed the pyramids in Egypt, and today's modern workers in Turkey, the TKP said that the workers are forced to work and live to death in shanty houses like concentration camps. "The workers from the third airport have dealt a big blow," the TKP noted, a big blow to the exploiters who think that they could eradicate the Turkish working class' traditional resistance and struggle against exploitation.

Indicating to the police and gendarme attack on the resisting workers with gas bombs, the TKP underlined that the construction workers did not surrender to the government's terror attack, marking an honourable day in the name of the working class in Turkey. The TKP said that the recent resistance of the workers was neither the first nor the last, as the same workers had already taken action in February against inhumane working and living conditions.

"Our Conference calls on our working people to support this resistance, and reminds that the resisting workers at the third airport are waging such a struggle that serves as an example not only for their rights but also that of the whole workers," the TKP concluded the statement.

Around 600 workers were arrested late on Friday following their recent protest, and 160 of them have been released today. The workers have been forced to work and live under poor conditions to rush the work to launch the airport on October 29, 2018, as the Justice and Development Party claims that İstanbul's third airport will be the biggest in the world.

WORKERS ARE FORCED TO WORK AND LIVE UNDER INHUMANE CONDITIONS

Nearly 10,000 workers live in the airport construction zone in northern İstanbul, yet the number is more than 20,000 on regular days, reaching up to 36,000 when the construction works are at full speed.

Interviewed by soL News, the workers say that they are forced to work and live under horrible conditions such as dirty, unhealthy and inadequate food service and poor dormitories with bedbugs. They also underline that deaths and injuries occurring while working are concealed from the public.

After the attacks, the workers announced their demands from the company, including reinstating the fired workers, the solution of shuttle, food and dormitory services, the regular payment of salaries and other pays, and the solution to occupational murders.