Fatih Mehmet Maçoğlu, newly elected communist mayor of Turkey's Dersim province, hanged income and expense report for 2018-2019 period outside the municipality, showing that the trustee appointed by the AKP government has burdened the municipality with a debt of more than 60 million Turkish lira 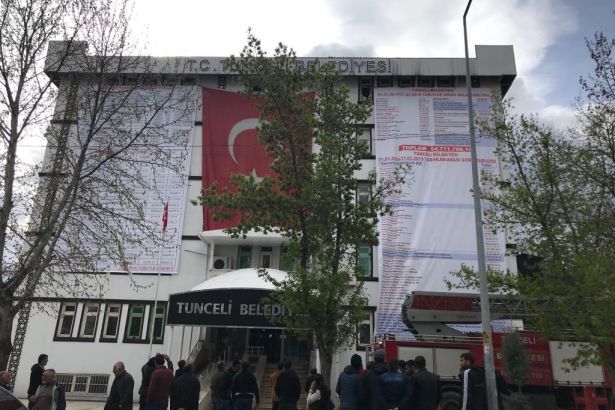 Fatih Mehmet Maçoğlu, the newly elected mayor of Turkey’s eastern province of Dersim from the Communist Party of Turkey, made the income and expense report for the period of 2018-2019 public by hanging a banner outside the municipality building.

The communist mayor informed the public about the income and expense account statement during his mayorship in Ovacık district of Dersim due to his transparent understanding of municipalism and he continues to follow the same understanding in the new period.

"We have shared the 2018-2019 Income and Expense Report of our municipality with people. We hanged the income and expense report of 2018-2019 as the Municipality of Tunceli (Dersim) to bring it to the public attention as part of our transparent understanding of municipalism," it is stated on the Twitter account of the Dersim Municipality.

The account statement shows that the trustee appointed by the AKP government has burdened the municipality with a debt of more than 60 million Turkish liras [$10,259,162.00].

In 2016, Turkey’s Ministry of Interior had discharged the Mayor of Dersim from the pro-Kurdish Peace and Democracy Party (BDP) elected in 2014 local elections and had appointed a trustee to run the municipality.