Communist and Workers' Parties have issued a joint statement on the occasion of the first of May, International Labor Day. 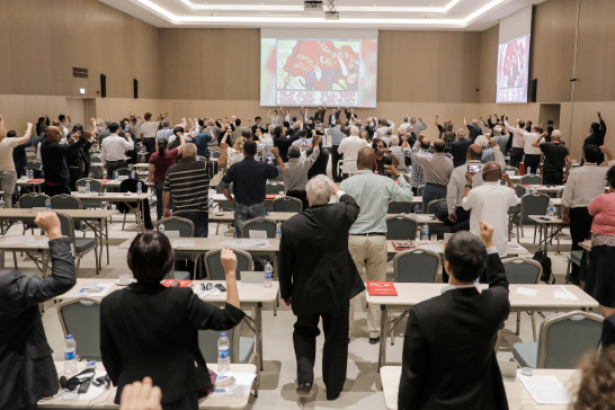 SolidNet member communist and workers' parties, including the Communist Party of Turkey (TKP), have released a joint statement on the occasion of the first day of May. SolidNet parties stated that the International Labor Day remains to motive their fighting for socialism which is the bright future of humanity. The full statement is as follows:

The Communist and Workers' Parties, which co-sign this Joint Statement, would like to express a common global position on the occasion of the first of May International Labor Day. Despite the fact that this year's workers' mobilizations will not be as massive as in previous years, due to the effects of the Covid-19 epidemic, workers will use many forms of struggle to honor their International Labor Day as a strike day, and will project their goals and demands, to oppose capitalist exploitation.

Our communist and worker parties organize diverse activities in this occasion in addition of international activities, and this universal Statement is one of them.

In this year, at a time when the impact of the Covid19 epidemic is getting stronger and the public health system in the most capitalist countries is failing and cannot protect human safety.

Millions of workers have lost their jobs, and labor rights are abolished, thousands of workers, especially the elderly are at risk of losing their lives, and health systems are powerless in the face of this epidemic, the world economy is in big crisis, while the capitalist governments helps the large monopolistic capitalist firms by giving trillions dollars to their companies to protect Capitalism systems, and leaves millions who are suffering from poverty, unemployment and marginalization

The new global crisis is not a result of Covid19 epidemic. We as the Communist and Workers' parties estimate that this crisis is the result of the insurmountable contradictions of the exploitative system, while the emergence of Covid19 epidemic emphasizes the class character of the anti-popular policy of bourgeois governments and Capitalist market economy which neglected policies that serve health and the environment and scientific research.

In this new situation we fight as communist and labor parties in our countries against dictatorships, the extreme right, the new fascism and in general capitalist regimes that exploit the working class and other popular strata. We are fighting against the imperialist plans and interventions of the USA, NATO, the EU and their allies. At the same time, we are fighting together for socialism which will establish real development, which will serve the people's needs and the cause of peace, will abolish the exploitation of man by man.

Capitalism is not the end of history, and the communist and workers' parties seek to coordinate the international struggle to overthrow it.

The struggle for peace, workers' rights, save environment, public health protection, ending of poverty and unemployment needs workers' power, Socialism, and the joint struggle of the Communist and Workers' parties, of the working class and the peoples.

The first day of May the International Labor Day remains to motive our fighting for socialism which is the bright future of humanity.