"Collaborators of Nazism must be brought to justice"

The European Parliament has stated that it views Nazism and Communism as equals in its most current resolution. The intellectuals in Turkey have contributed to the opposition against the resolution with a signed protesting letter. soL news interviewed TKP CC member and soL columnist Erhan Nalçacı on the recent anti-communist resolution 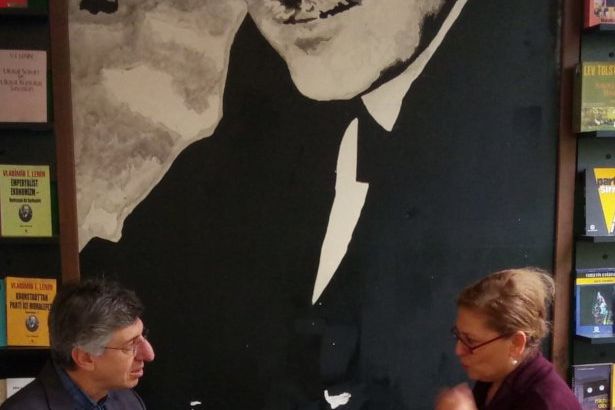 The European Parliament has approved the resolution called “European remembrance for the future of Europe" by a majority of votes. In the resolution, Nazism and Communism are seen as equals within the context of totalitarianism. The resolution evaluates the German-Soviet anti-aggression pact as the sole cause of the Second World War and questions the fact that the Soviet Union was not tried in court due to its war crimes.

The European Communist Initiative and TKP have initiated campaigns against the statement.

Hatice İkinci from soL news has made an interview with the CC member of the Communist Party of Turkey (TKP) and soL columnist Erhan Nalçacı on the issue.

We are not living at the beginning of the 20th century during the rise of the socialist movement; we are not also living in the 1950s or 1960s. From their perspective, there is nothing to be worried about at least in the near future. No one remembers the days of the cold war. However, especially in the most recent years, we witness that anti-communist discourse is present in every area including cinema, literature, TV shows let alone politics. We may probably say that we are going through the weakest period of the socialist movement. Why does the European Parliament still require to approve such a resolution when the dangerous waters of socialism are so far away?

There are two dimensions to this issue. The first one is based on fear; imperialism accumulates experience and minds and they foresee that this era will not continue like this. The working class will revolt eventually. They are also aware that the imperialist system is not doing well either. Next year is crucial for the whole world; experts are expecting an economic recession. Of course, not only an economic crisis but also the hegemony crisis of imperialism has a risk of starting wars. They know it well. This system, which does not provide any solutions to this crisis, and any future for the toiling masses, will eventually face an uprising led by the working class. The extended lifetime of bigotry is no guarantee either.

They achieved strong victories in various areas with the dissolution of the Soviet Union. We are going through an extended era of bigotry. Maybe the people on the street cannot notice this era and consider that “it was always like this”. Maybe the young people who were born into this period have never witnessed anything progressive in their lives. Maybe these people have not noticed this situation. However, the consultants, thought leaders of imperialism and people with an understanding of history are aware that this system will face a social uprising eventually.

“THEY WANT TO BLOCK THE WAY TO SOCIALISM FROM THE BEGINNING”

Do they also see this inevitable?

Of course, they see this inevitable and the tip of the iceberg started to be seen. Now in Equator, Iraq, Argentina and everywhere, there is discomfort and a tendency towards uprising. I think these may be evaluated as the signs of the coming period. This is why they want to block the way to socialism from the beginning. They need to slander socialism every time. They need to repeat that there is no hope there and no horizons for the humankind. They develop tools aimed at this. This is the most important factor behind the resolution European Parliament has approved on September 18.

In the resolution, it is stated that Russia has not enough confronted with socialism and has legitimized it. Why is Russia on their target?

Although this aspect of the resolution is not widely discussed, we may argue that at least a portion of the capitalist class aims the consolidation of Europe against Russia with this decision. For example, if you visit Bulgaria and have a tour at the museums, you will realize that they completely neglect the 40 years history of socialism in Bulgaria and delete this history, which is a victorious period of Bulgarian history. The situation is similar for other People’s Republics in Europe. However, Russia cannot do that because there was not a bourgeoisie revolution in Russia. If we rephrase, the revolution of the working class emerged soon after the bourgeoisie revolution. The peoples of the Soviet Union had lived through the most successful enlightenment and development period the history witnessed. The region went through the fastest and most unbelievable transition in human history. They cannot remove this from history.

Russian bourgeoisie led by Putin acts very smart in this issue and tries to use the socialist era as a motive in their Great Russia idea by eliminating its class roots instead of removing this era from its history. That is their whole effort; the Putin Administration is not at peace with class struggles and working class government in the Soviet Union.

GERMANY WAS MANIPULATED AGAINST THE SOVIET UNION BY THE IMPERIALIST COUNTRIES

In addition, there is the issue of holding the Soviet Union responsible for the Second World War. Nurnberg Trials established after the war have found Nazi leaders guilty for “planning and executing war for conquest purposes” and the Soviet Union was present at these trials. There is no realistic basis for the accusation. On what basis these statements were included in the motion?

They have very limited grounds for criticizing the Soviet Union and they are holding on to them, but the whole resolution has a significant historical deviation from the truth. They want to see and perceive it like this, they want to rewrite history and make the people forget the real history. History has always been an area of class struggle for us. It is the same for them.

The First World War has concluded with the Soviet Revolution and they have never processed this idea. As you well know, all imperialist Powers have intervened in the civil war after the October Revolution. However, they failed to succeed and the revolution was victorious. The Soviet Union has achieved a great breakthrough with the centralized planned economy while the imperialist World was going through the Great Depression in 1929. Therefore, the country, which was developing at an incredible speed without any foreseeable economic crisis in which there was no unemployment and the people lived equally, became a horrifying threat for imperialism. The destruction of the Soviet Union became the number one priority on their agenda. This was not only the issue of Germany. The imperialist powers manipulated Germany against the Soviet Union. Hitler’s rise to power was not a coincidence, it was the choice of the imperialist world. Their first goal was to wipe the first socialist region of the World from the map. Details such as the Versailles Treaty imposed on Germany were circumstantial motives of the process.

The main character of the Second World War was the desire to wipe the Soviet Union out of the political scene. The Soviet Union has anticipated this very early and initiated its preparations. The Molotov-Ribbentrop Pact mentioned in the resolution was a tactic for gaining more time for preparations. As you know, later, Germany attacked the Soviet Union with all its force and the world witnessed a devastating war. Over 25 million Soviet citizens lost their lives.

Of course, they can, and many of the historians they hire will support them. All history books can be rewritten with the order of politicians. These kinds of resolutions can be published everywhere; the media can always cover such decisions and a deviant understanding of history can be established in people’s minds. This has nothing to do with science.

The Soviet Union was active in Nurnberg Trials, the establishment of the United Nations and its Security Council. From this perspective, they are falsifying their own history.

Note the following sentence is included in the resolution: “Nazis were defeated and tried at Nurnberg, however, the Soviet Union was never tried.”

Back then was the Soviet Union also on the side of the prosecutors.

Of course, it was. However, there is a claim that “The Soviet Union should not have been the prosecutor because it was victorious, it needed to be tried.” The opposite is correct. USA and Britain also had to be prosecuted. However, the strength of the Soviet Union was not enough to prosecute them; the political balance did not allow this. The Red Army has never bombed cities or civilian settlements although it was a catastrophic war. They reached Berlin by fighting at each street. You may say “war has no ethics”, but this is very important ethically.

Firstly, the US and Britain have bombed German cities until with their fighter fleets until complete destruction. Incredible civilian massacres occurred. These countries had to be put on trial for these crimes. Secondly, they used nuclear weapons on civilians although it was a known fact that Japan would surrender. They needed to show the strength of their nuclear weapons in order to stop the advance of the Red Army in Asia and Europe. They used these bombs against highly populated cities. They did this on purpose to demonstrate how destructive and murderous they can get. If there will be a trial, these two countries need to be tried first.

We must establish this link; the responsible for the Second World War and all the massacres and murders committed after the war are European and US monopolies and their states. The view of deputies signing this resolution is, of course, the same with these monopolies. Therefore, we can easily say that the same parties committing these murders and massacres write this motion.

Isn’t it a known fact that the Nazis were stopped by the Soviet Union; can they alter this reality by approving a resolution?

We should not think that everybody knows this. They are trying hard to prevent people from reaching information, they are trying to make nations dumb, and they have various tactics. In the end, they make it hard for people to understand what really happened in history. If the people of the world understood the reality in history, could the imperialists maintain their power?

A petition campaign was initiated in Turkey against this resolution. Could you give us some details?

In the end, this resolution also is an area of struggle. The European Parliament publishes it, makes its propaganda and tries to convince people. People on the side of equality and enlightenment, organized forces needed to answer this resolution. This issue will not end with a resolution, they will try other moves in order and pro-working class forces will make counter moves to retell history. This is a struggle. Do not consider history as a told, completed phenomenon. We are also trying to understand it repeatedly.

The European Communist Initiative initiated the campaign. Inspired by this campaign, intellectuals in our country have gathered to publish a statement protesting the resolution of the European Parliament. This statement will be distributed to broader masses next week and a powerful contribution will be made from Turkey to the worldwide protests.