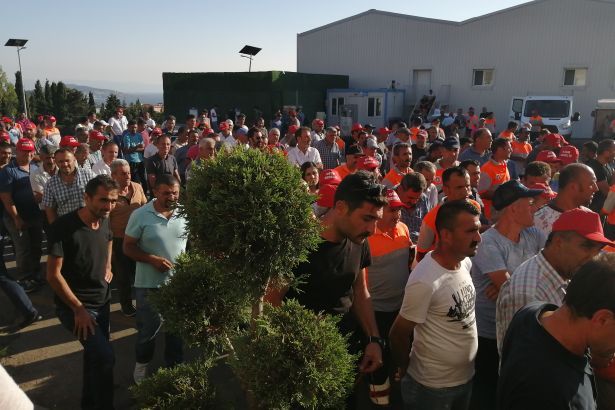 Out of 1700 workers, 850 launched a resistance on July 19 and stopped working at the municipality building of Istanbul's Maltepe district, which is ruled by the opposition Republican People's Party (CHP). The workers want the employers to act in accordance with the conditions of collective bargaining.

The workers protest Ali Kılıç, the district mayor, for targeting them via his social media statements. soL news talked with a representative of the resisting workers from the trade union, DİSK, the Confederation of Progressive Trade Unions of Turkey.

"Our collective bargaining agreement is not being implemented. We could not get any wage increase because our rights have not gone into effect so far. We stopped working since we could not get our pays," the representative said.

The representative told soL that they have waited for the implementation of their collective bargaining process for the last 8 months, adding that they resorted to their legal right to strike action since the employers took no step.

A cleaning worker told soL that they faced no wage increase under the pretext of "inadequate budget" despite their legal agreement with the employers. He also noted that they have not had any food aids during their annual leaves, adding that they could not get their cleaning clothes for 3 months.

Referring to the mayor, Ali Kılıç, the worker said that the mayor told them, "I want you to have a proper lifestyle in European standards; I am a democrat, we will celebrate the collective bargaining draft" at a cultural center. However, when the mayor returned from his visit to Ankara, he started to delay the agreement in defiance of the workers.

The workers got angry with the mayor as he said that he was paying 3000-3500 lira ($530-$620) for a month even for primary school graduate workers. However, the worker told soL that their net wage is 2000 lira ($353) as their wage reaches around 3000 lira with minimum living allowances.

"We want the agreement to be confirmed. We have no other goal," the cleaning worker concluded, criticizing the mayor for contradicting his allegation to be a social-democratic personality. "We will never give up until we win," he said.