Citizens did not allow the meeting to be held by Cengiz Holding on the Copper Mine Project in Çanakkale, protesting the environmental destruction the project will cause. 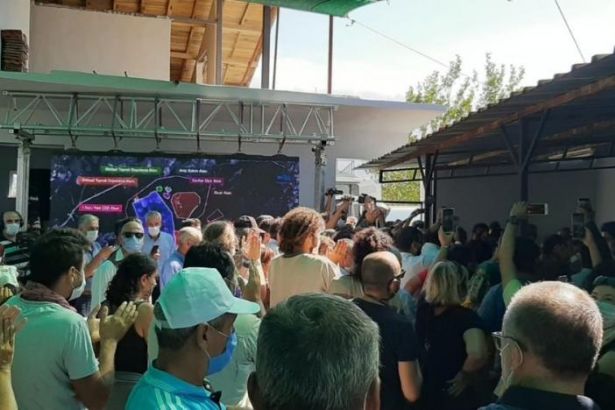 The meeting on the Environmental Impact Assessment (EIA) for the copper mine project of Cengiz Holding was planned to be held in Hacıbekirler village. But the meeting was canceled after citizens reacted.

Citizens who take the road in the morning to attend the EIA meeting tried to be prevented by the police until they arrived in the village where the meeting would be held. At the gendarmerie checkpoints established on the roads, the vehicles were blocked for about 1 hour due to the procedures.

Citizens who protested the EIA meeting for gold mining in the forest-covered area of the village entered the meeting with slogans demanding the cancellation of the project. The gendarmerie attacked the citizens with tear gas.

Muratlar and Halilağa villagers have been fighting against this mining project for years. The mining operation of Truva Bakır Incorporated Company, owned by Canadian companies Liberty Gold and Teck Resources was acquired by Cengiz Holding for 55 million dollars last year. Cengiz Holding is known as one of Turkey's fastest-growing capital group during the AKP rule.

Villagers continue to defend their habitats against the environmental massacre planned by the holding.