The leader of the main opposition CHP, Kemal Kılıçdaroğlu, was attacked on Sunday, almost leading to lynching attempt, as the ruling AKP and ultra-nationalist MHP claims it was a "protest" 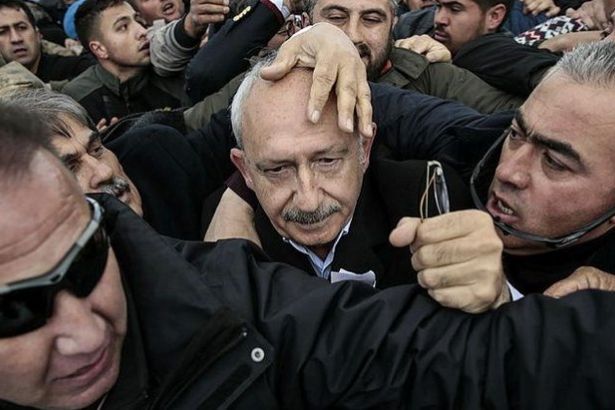 Turkey’s main opposition CHP’s leader, Kemal Kılıçdaroğlu, was attacked on Sunday at a funeral of a soldier in Çubuk district of Ankara.

Video of the incident on social media showed a group of people pushing Kılıçdaroğlu and one from the group hitting the party leader as he made his way through the crowd.

Kılıçdaroğlu was then escorted by the security forces and took shelter in a nearby house. Another footage also showed that the attackers gathered and waited in front of the house and someone shouted “burn the house down”, making the attack a lynching attempt.

The crowd dispersed after a while and Kılıçdaroğlu was reported to be safe by the party officials.

The funeral was for one of the four soldiers killed on Friday in clashes between the Turkish military and the Kurdistan Workers Party (PKK) near the border with Iraq.

AKP OFFICIALS CLAIM IT WAS A “PROTEST”, MHP LEADER SUPPORTS THE ATTACKERS

Turkey’s Defense Minister, Hulusi Akar, made a speech in front of the house where Kılıçdaroğlu was sheltered. Addressing the attackers as “my dear friends”, Akar called on the crowd to calm down since “they have shown their reaction and given their messages.”

Meanwhile, the governor’s office of Ankara made a statement saying the security forces would ensure the necessary precautions to stop the “protest”. According to the sources, the police refused to use tear gas to disperse the crowd.

The attackers were not local people but brought from somewhere else, it is reported.

The leader of the ultra-nationalist MHP, the ruling AKP’s ally, said after the attack that “what did Kılıçdaroğlu do to make the people so angry?”, hinting that the crowd has the reason to attack the CHP leader.

Erdoğan's ruling AKP and ultra-nationalist MHP have accused Kılıçdaroğlu, several times before, of cooperating with the pro-Kurdish HDP. The Minister of Internal Affairs, Süleyman Soylu, stated before that CHP officials should not be allowed to attend soldiers’ funerals.

TKP: THE GOVERNMENT CANNOT ESCAPE FROM THE RESPONSIBILITY

Communist Party of Turkey (TKP) released a statement about the attack targeting the CHP leader Kemal Kılıçdaroğlu. In the statement, TKP said that "nobody would dare to attack the leader of the main opposition party without the guidance of power in control in Turkey". The statement also reminds that the representatives of the ruling political party and especially Erdoğan himself have been targeting dozens of people every day.

The statement also expressed that the responsibility of the political power, which nurtures the culture of threat, blackmail, insult and lynch for years in the country, cannot be reduced even if this attack is about revenge politics inside the party or even if it does not benefit to the ruling power.