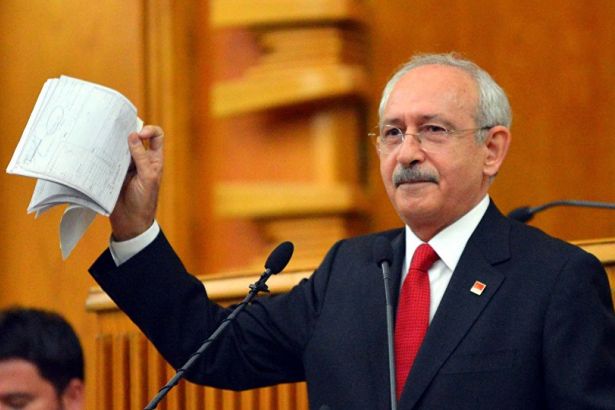 Turkey's parliamentary main opposition CHP party leader Kemal Kılıçdaroğlu on Tuesday revealed that President Tayyip Erdoğan's family - including his brother, his son and his executive assistant – made transactions worth around $15 million to an off-shore company called Bellway Limited in the tax haven Isle of Man in December 2011 and January 2012.

"We have all the records of this company," Kılıçdaroğlu said addressing his group at parliament. The broadcast of CHP leader's speech was cut by state-run TRT television just before he began outlining the accusations.

TRANSFERS MADE BY FAMILY MEMBERS

He then listed the transfers made by family members including Erdoğan's son, Ahmet Burak Erdoğan, between 2011 and 2012 to the company.

"On Dec. 15, 2011, Ziya İlgen, the brother-in-law of [President] Erdoğan, sent $2.5 million U to the Bellway Ltd., while Mustafa Erdoğan, the [president’s] brother, sent $2.5 million. Why did your brother send $2.5 million there?" Kılıçdaroğlu said, going on to list all the transactions in the documents.

Other CHP members at one point chanted "Tayyip, resign!" during the speech.

Kılıçdaroğlu said his party was in possession of all transaction documents related to the transfers, as well as SWIFT messages and bank details. SWIFT is the system used for international bank transfers.

The revelations come after Kılıçdaroğlu challenged President Erdoğan on Nov. 21 about the off-shore accounts of his family.

Erdoğan at the weekend promised that he would "not stay one minute more as president" if Kılıçdaroğlu could prove his claims.

Calling on Erdogan to resign in light of his accusations, Kılıçdaroğlu said: "If you are an honourable man, you will do what is necessary."

Erdogan's lawyer Ahmet Özel was quoted by state-run news agency Anadolu saying that the documents Kılıçdaroğlu presented were "fake". A deputy form Erdoğan's ruling Justice and Development Party (AKP), Bülent Turan dismissed the claims as "foolish and unfounded" and said all the accusations were "lies".

When Kılıçdaroğlu previously demanded to know whether Erdoğan was aware that his family were "sending millions of dollars of money to tax havens", the president responded by suing him for hundreds of thousands of dollars last week. Ahmet Özel made an application to an İstanbul civil court for 1.5 million Turkish liras ($380,000, 320,000 euros) in compensation for "spiritual damage" from Kılıçdaroğlu.

According to the reports in May 2017, through offshore companies in the Isle of Man and Malta, the Erdoğans secretly own an oil tanker worth nearly 25 million USD called the Agdash.

The Erdoğans obtained the Agdash from Mübariz Mansimov in October 2008, using a company in the Isle of Man called Bumerz Limited – named after its principal owners - the president's son, Burak Erdoğan, his brother, Mustafa Erdoğan, and brother-in-law Ziya İlgen.

CHP leader also demanded accountability for the alleged $30bn that Erdoğan claimed to have spent on Syrian refugees.

"Erdoğan took the stage at the UN and announced that he has spent $30bn on Syrian refugees. The Syrian refugees are all either starving or begging. Where did this money go? No one knows. Ministers don't know, 550 MPs don’t know. We demand an answer," said Kılıçdaroğlu.

Earlier in November, ruling AKP party blocked in the parliament an investigation into the alleged involvement of Turkish Prime Minister Binali Yıldırım's sons in the offshore activity. The leaked offshore database dubbed the Paradise Papers, where Yıldırım's sons were featuring, was published on November 5 by the US-based International Consortium of Investigative Journalists (ICIJ).