CHP deputy worries about the business world because of workers' strike

Tacettin Bayır, İzmir deputy of the parliamentary opposition "left-wing" Republican People’s Party (CHP) said that the demands of the İZBAN workers on strike can harm the business world 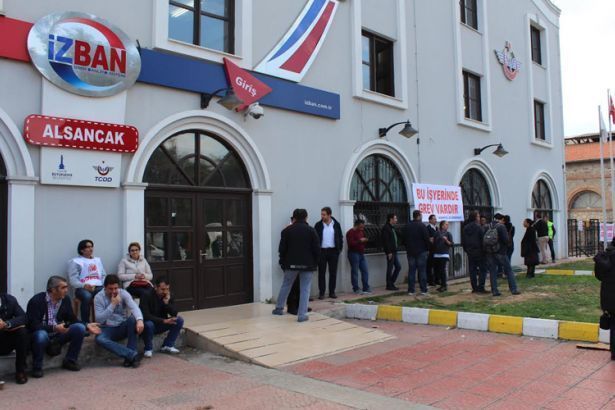 Tacettin Bayır, deputy of the main "left-wing" opposition party, Republican People’s Party (CHP) for Turkey’s İzmir, was interviewed at a radio programme and stated that Aziz Kocaoğlu, Metropolitan Municipality Mayor of İzmir who was also elected from the CHP, did not want to upset businessmen on the issue of İZBAN workers’ strike.

Over 300 workers have been on strike for three weeks after they disagreed with the İZBAN management, a commuter rail system operating in the western Turkish metropolitan city of İzmir, during the collective bargaining process regarding their wages.

Underlining that it is necessary to set the parties of the matter right, CHP Deputy Bayır pointed out that there are the workers who have understandable demands, on the one side, and Kocaoğlu who offered the workers a 25% raise, on the other. Trying to exonerate Kocaoğlu’s and the employing firm’s acts against the workers' strike, Bayır said that Aziz Kocaoğlu “is not paying the money out of his pocket. He is paying it out of our taxes, out of the people’s money.”

Bayır also reflected some other concerns about the businessmen in the country, stating: “This rate of raise could antagonize the business world against Mr. Kocaoğlu. Employees in the private and public sectors who hear about this raise would also demand the same rate from the employer. Industrialists, employers are not in the position to pay this much, they cannot afford it.”

Suggesting that the workers should take a break from seeking their rights until the local elections on March 31 by using an iron hand in a velvet glove, Bayır finally offered a “midway”: “I call out to the working fellows of mine [who are now in strike] and offer them a formula for collaboration. Let us not do this in the electoral period. Accept the 25% raise. Let us discuss the gap altogether with the new Mayor on April 1. Let us not cause our citizens in İzmir any suffering. Our citizens might question why there is a strike in İzmir and not anywhere else.”

During the strike, İZBAN management resorts to an unconstitutional act of strike-breaking by employing seven retired train drivers during the strike in the absence of hundreds of workers and necessary railway controls and maintenance system.

About the strike that began on December 10, the Mayor of İzmir, Aziz Kocaoğlu, stated that he would not offer even the 22 percent wage raise, if he would be a candidate for the local elections of March 31. In his speech in a school on December 14, he said that "Show me who else offers a 22 percent raise. A welfare share is given when the economy grows; when the economy shrinks everyone suffers".

As İZBAN alleges that the corporation offered 22 percent of a wage increase to the workers, Hüseyin Eryüz, the chair of the railway workers’ union in İzmir, explained soL News that the İZBAN management ran up the offered amount with family allowances. Eryüz has said that the employer company has resorted to a perception operation against the workers’ strike, adding that most of the workers cannot benefit from such social allowances.

İZBAN management has raised the offer to 25 percent recently, but the offer has not been accepted by the striking workers.