Cargill workers in Turkey, who had a thousand days of struggle for their rights, stated that they would not give up despite the detention and punishments. 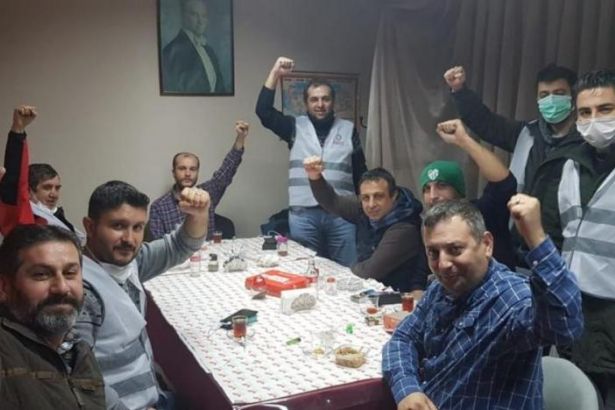 Cargill workers who were fired because of being unionized left 1000 days behind in their resistance. The workers' struggle began 1000 days ago as a sit-down strike by 14 workers in Bursa, in front of the Cargill factory.

“We are the force of the state,” said the police, who did not allow the workers to make a statement in front of Turkey’s Ministry of Agriculture and Forestry and threatened the workers by adding that “We will show you what we can do, don’t worry”.

The workers who were detained and then released were fined twice, accused of breaking the curfew on their way back to the city of Karaman from the custody, despite the written report by the police. Cargill workers spoke to soL news regarding their struggle.

Suat Karlıkaya, who is responsible for the unionization of Tekgıda-İŞ, said that they would continue their struggle despite the detentions:

"This is a resistance of 1000 days. It is a struggle of workers who have won in the courts but lost their jobs because they used their constitutional rights. Workers are fighting against Cargill, an international company. We want all worker friends to know that such oppression will not deter us. Cargill workers will struggle until they return to work. "

Oğuz Çömez, a Cargill worker said they were preparing to make a statement in front of the US consulate. They wanted to announce this in the press release where they were detained. Çömez spoke as follows:

"We made a press statement in front of the Ministry of Agriculture and Forestry and prepared a letter to explain our situation by reminding the minister's own words. We were going to rest a little because our arrival time was early in Ankara. We set out at 4 in the night. Police vehicles came. They didn't take us out of there. They didn't make us sit in the union garden. They asked us to go in. Then we were detained, you already know the penalties.

In the statement, we wanted to announce that we would make a statement in front of the US consulate 2 weeks later. We will forward a letter in the coming days to deliver it to the US consulate.”

Faik Kutlu, one of the workers, stated that the police prepared the penalty reports when they arrived in the city of Karaman. Kutlu said the following:

"We were taken into custody at around 4 pm. We were taken to the testimony. They divided us into 4 different districts. It was 21.00 until the proceedings were finished. “The statements show that you are out of custody, no need for permission,” said the police regarding the curfew that started at 9 pm. We passed 4-5 police groups inside of Ankara with the police escort. When we went 2km more, they surrounded the cars at the gas station. We did not understand what was happening. They said that they will fine us. The police explicitly took revenge on us. They did not let us return to Ankara. We do not accept these events. They also fined us again when we arrived at the city of Karaman. The reports were ready when we arrived. They already prepared it before we arrived. "

While Cargill, one of the US food monopolies with an annual income of 130 billion dollars, was included in the list of companies to which incentives were applied by Turkey’s ruling AKP, it was announced that a 70 percent tax reduction would be applied to the company.