"All bosses love democracy. Democracy is the political preference of the capitalist class for the modern state. And the content of this “democracy” is often unrelated, sometimes antipodal, and sometimes opposite, as a consequence, to the toiling classes’ demand and need for democracy" 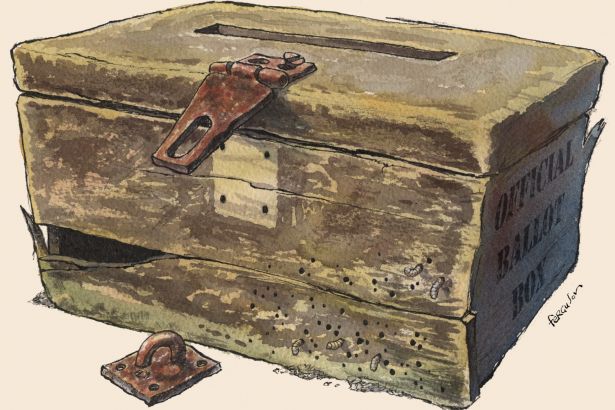 Mehmet Kuzulugil, soL columnist and the CC member of the Communist Party of Turkey (TKP), wrote an article on the debate of democracy and fascism.

Indicating to the notorious statement of the Volkswagen's CEO Herbert Diess who referred to the Nazi-era slogan, “Arbeit Macht Frei”, at a company meeting, Kuzulugil evaluated the worldwide contemporary capitalist class’ stance towards democracy and fascism from a Marxist perspective.

“The analyses of fascism...”

This was often at the center of Marxists and revolutionaries’ theoretical agenda of the debates in the last century.

Moreover, it would be straight to say, “The Turkish Left put aside such issues as the class analysis of the country in the 1970s, and instead, it focused on the analyses of fascism”.

“Socialist revolution or national democratic revolution?” This was the magic and urgent question of the 1960s.

It was replaced by conceptual dualities like “civilian fascist/official fascist”, “military intervention/fascist dictatorship”.

Let us keep it short.

The most important weirdness of our theoretical history is that the question, “How the classes are represented in politics, and how the state as the political superstructure of class hegemony emerges?” was thoroughly falsified in the analyses of fascism.

The reason is apparent: Despite being able to give very productive answers to the question where this fascism came from and on what class basis it rises, the Marxists were not able to do so under the pressure of the slogan (and practical need) “fight against fascism”.

What you are reading is not an article of history, let alone having any “theoretical” concern. I want the readers to excuse me for taking the shortcuts, and then I will return to this point after proceeding to the thesis on the title.

Having been read on the entrances of concentration camps, these words confronted the world as a ribaldry of the Volkswagen boss at a company meeting 74 years after the nightmare of Nazis: Arbeit Macht Frei. The Nazis had built giant working camps consisting the prisoners and the victimized citizens of pogroms, and inscribed these words at the entrances of the camps as an expression of cold fascist humor: Arbeit Macht Frei! When “das auto” attempted to revive this slogan at a company meeting after years, it made a bit fascistic yet a very cold joke: EBIT Macht Frei. The boss apologized. He said that he chose a wrong expression, “I should not have talked like this,” he added. “Particularly,” he continued, “given that Volkswagen’s specific historical role in connection to the Third Reich is known!” After all, he was a boss, and he loved democracy. At least, he knew that he should love it.

All bosses love democracy. Democracy is the political preference of the capitalist class for the modern state.

And the content of this “democracy” is often unrelated, sometimes antipodal, and sometimes opposite, as a consequence, to the toiling classes’ demand and need for democracy.

There are answers to the question “Why the bosses want democracy?” yet the order of these answers may change in accordance with the concrete situation. Let us look at them first.

1. The bourgeoisie, i.e. the capitalist class, is defined with a highly strong internal competition although it looks more integrated, even more internationalist in comparison to, for example, the aristocracy. The abundance of all sorts of partnerships, temporary and permanent mergers, consortiums, and international organizations in the World of Bosses is essentially a result of competitiveness that is the soul of capitalism.

Consisted of the bosses who are always ready to throttle each other, the bourgeois class needs democracy even for bringing order into its internal relations.

Considering that the use of state power as leverage of enrichment and accumulation has become an almost universal rule, the abundance of examples of crony capitalism does not contradict this fact. On the contrary, these show how the exploitative class needs a “principle of democracy” that will enable it to establish balances at least within itself.

It is not surprising that this class often betrays democracy and the individual although it regards them as ideologically holy things. They often betray, and democracy is a must for them.

2. The capitalist class needs politics and the state not only as a way of its own class instrument of control (hegemony) but also as an “expert” structure to bring itself under control. The “state tradition” that is enthused in capitalist countries is essentially a contemporary definition. Such an expert structure, which would sometimes say “stop” to the daily needs of its owner, also exists in order to protect its owner from its greed.

The principle of “democracy” cannot be seen as a logical necessity for a state that will also control the bosses when required and that will protect them from themselves. Yet, it is a “natural” consequence. (We can consider this as the law of entropy in politics. It is not a logical necessity, but the democratic state emerges as a natural consequence as the most appropriate way.)

The state protects its class from itself, while the principle of democracy prevents the state from “corruption”.

3. The hegemony of minority has been a rule in the history of class societies. On the other hand, we can say that this rule has mathematically reached a giant scale within the contemporary capitalist world. While the feudal hegemony served the individual hegemons’ priority of welfare and consumption by any means, capitalism has an individual wealth that is too huge for the individuals to “eat alone”.

Moreover, the toiling classes, which live in a very adjacent order, which is able to unite easily, and which has a huge strength, sits on the opposite side of the seesaw on which they [the capitalist class] sit thanks to this enrichment.

The bourgeois democracy is the best and sole form of bosses’ rule through which they prevail in cooperation (!).

Tyranny is not something that can carry the entire load in such a world. The bourgeois democracy in which the money rules cannot open all the doors, yet it pushes back the toiling masses.

In conclusion, the bosses are democrats. They love democracy. (Of course, their love of democracy does not necessarily mean that democracy loves them.)

What can we infer here?

First of all, can one infer that the communists’ faithlessness in the bourgeois democracy is a dogma, a rough obstinacy?

No, because the communists believe in the bourgeois democracy: it exists! (Just like the materialists believe in the god: it doubtlessly “exists”. In the human’s mind, and in social practice!) Nevertheless, it is not as holy, consistent and “democratic” as it is supposed to be.

And, can one infer that fascism is not a movement that arises from the will of the bosses in contrary to the communists’ allegations, that it would be wrong to see it as a result of capitalism (and, of course, of the imperialist capital!), and that capital is not responsible for fascism?

Cannot fascism be the sin of racist, nationalist Euroasianists?

No. What we have said so far might pave the way for such illusions, yet beyond it and essentially, the bosses’ addiction to fascism is as natural and logical as their love of democracy.

So, we should ask the question, “Why the capitalists betray democracy?” in an answer to the emergence of fascism as a mode of the capitalist state.

Shall we title the next article “The bosses are fascists”?

Not because it would be unfair.

Otherwise, firstly, we would forget that fascism is an extraordinary situation for the hegemony of capital.

Secondly, we would lay all the sins of fascism on the shoulder of the capitalist class. However, “fascism is a punishment of the proletariat for failing to carry out the revolution.”

Footnote: Let us emphasize something before the next article: to such an extent fascism is an extraordinary situation, a mode/situation rather than a well-defined regime, it is better to evaluate the findings regarding the fascistic essence while making explanations about the class hegemony, the politics, and the state rather than making definitions of fascism.